Arizona's Senators - Martha McSally (R) and Kyrsten Sinema (D) - are voting on the President Trump/Majority Leader McConnell bill to fund the border wall and end the shutdown. On this first of two votes, the Senators voted their parties' positions, McSally voting "aye" and Sinema voting "nay". It also included other immigration- and asylum-related items. The measure failed to get the necessary 60 votes to move the measure towards completion (aka cloture). (Final vote: 51-47; GOP Senators Tom Cotton and Mike Lee voted "nay"; Democrat Joe Manchin voted "aye".)

The Senate then had a cloture vote on a measure to fund the portions of the federal government that are now shutdown and to continue debate on funding for the Trump-supported border wall. Senator Sinema voted for the measure, and Senator McSally voted against. The final vote was 52-44. (UPDATE: The Republicans who voted "aye" were Alexander (TN), Isackson (GA), Romney (UT), Collins (ME), Gardner (CO) and Murkowski (AK).)

Sinema was being targeted as one of three Democrats who might be persuaded to vote along with the Republicans on the Trump-proposed measure. She did not.

4:00pm: Senator Sinema's statement: "I voted to end this irresponsible shutdown, but the only real way out of this mess is for both parties to sit down, talk, and find a long-term bipartisan solution. That's what Arizonans expect and that's exactly what I'll keep doing."

2:40pm: Senator McSally explained her two votes minutes ago, in a series of tweets. She stated that she did not vote for the stopgap measure "because it fails to address the security and humanitarian crises we face in our Arizona communities along the border." 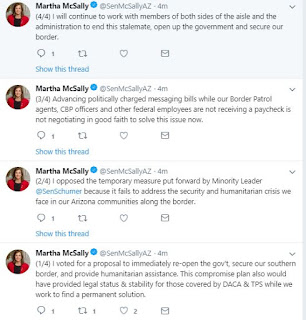 We welcome your comments about this post. Or, if you have something unrelated on your mind, please e-mail to info-at-arizonaspolitics-dot-com or call 602-799-7025. Thanks.
Posted by Mitch M. at 12:20 PM