Arizona's Members of Congress are marking two dates on the January calendar with very different pieces of legislation. One sings the praises of a (private) consortium of clinics opposed to abortions and the other would impose background checks on all gun purchasers.

Arizona's five Democratic Representatives all announced* today that they are co-sponsoring the background check bill on the anniversary of the mass shooting in Tucson that claimed the lives of 6 and wounded 19, including Arizona Rep. Gabrielle Giffords. The text of HR8 is published below.

Meanwhile, Rep. Andy Biggs (R-CD5) has sponsored a resolution in advance of this month's commemoration of the U.S. Supreme Court decision Roe v. Wade. Biggs is asking that the House of Representatives praise a new consortium of medical clinics that is being described as "sort of like a Good Housekeeping Seal of Approval for the pro-life medical community." The Pro Women’s Healthcare Centers certifies centers that meet their high, life-affirming standards. (Clinics in Gilbert and Tempe are among the nine centers across the U.S. listed.) Rep. Debbie Lesko (R-CD8) is among the three co-sponsors. The text of H.Res.16 is published below.

Biggs has sponsored 23 bills this past week. No other member of Arizona's House delegation is currently listed as a primary sponsor of a bill in this new Congress. 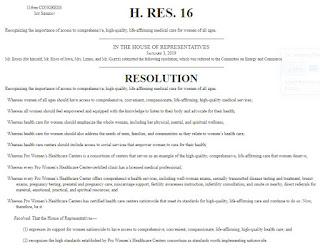 *Arizona's Politics has not yet found any statements from Arizona's four Republican lawmakers about the bill, although Rep. David Schweikert (R-CD6) did announce that the entire delegation would be commemorating the shooting with a moment of silence on the House floor.

We welcome your comments about this post. Or, if you have something unrelated on your mind, please e-mail to info-at-arizonaspolitics-dot-com or call 602-799-7025. Thanks.
Posted by Mitch M. at 5:48 PM