That did not take long. Arizona Senator Jon Kyl is back to his lobbying job after his 4-month vacation in the U.S. Senate. The large law and lobbying firm Covington & Burling confirmed the news today with a release (and Arizona's Politics emails to his Covington address are no longer getting kicked back, as they were on Friday and before*).

Friday, Arizona's Politics reported on Kyl's after the fact Senate Financial Disclosure Statement, which indicated not only that he had earned a healthy income at Covington (nothing wrong with that), but also that he earned a healthy income ($128k over less than two years) from Arizona State University (maybe something wrong with that), and that he had shadow-lobbied for APS and several other clients that had not been previously disclosed (with 9 other clients still not disclosed).

The Covington release expresses its "delight" at having the two-time ex-Senator back working with its clients, although it does not mention that he has a new two-year cooling off period on disclosed lobbying. This does not prevent him from doing non-disclosed consulting (aka shadow lobbying); as Kyl described it in his new disclosure statement - "legal/advocacy services and advice". 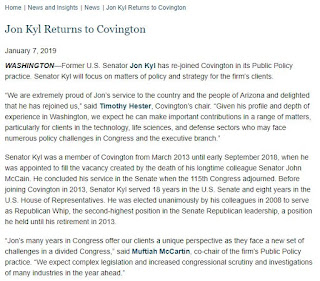 We continue to reach out to Senator Kyl for responses to questions about his lobbying, and will update this article as necessary.

*His email address at ASU was not inactivated during his recent Senatorial stint.

We welcome your comments about this post. Or, if you have something unrelated on your mind, please e-mail to info-at-arizonaspolitics-dot-com or call 602-799-7025. Thanks.
Posted by Mitch M. at 2:16 PM

I lost respect for Mr. Kyl years ago when I learned he used the secret "hold" to stop a bill from being voted on without revealing he was responsible.