BREAKING/IN-DEPTH SPECIAL REPORT: NOW (MOST OF) IT CAN BE TOLD: Kyl Lists ASU Part-Time Compensation, Honeywell Subsidiary Board, (Some) Non-Disclosed Advocacy Clients; Increased Net Worth 7X

It came the week after he left the U.S. Senate, but Jon Kyl has now filed the financial disclosure statement that all candidates and officeholders generally file before serving the public. In it, he discloses that: (1) he had been involved with many companies that do significant business with the federal government, (2) his salary as a part time ASU professor averaged $64,000, (3) he provided previously undisclosed legal/advocacy services for APS, SRP and others, and (4) non-Senate life increased the Kyls' net worth by more than seven fold. 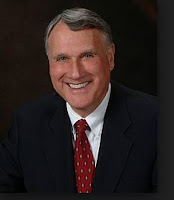 There had been much speculation in the media that Kyl was trying to avoid filing a financial disclosure statement at all, although Arizona's Politics recently pointed out he was still obligated to file the report by the extended deadline even though he would not be in office. Sure enough, the report was filed late yesterday evening.

The eye-popping numbers come on the first page of the report (below) when the Senator lists his income sources for the past two years*. His averaged annual compensation for his lobbying position with Covington & Burling is $930,000. In addition, he received approximately $128,912 during the period for teaching at Arizona State University - undergraduate and law school.

The ASU part time salary will undoubtedly attract more attention as a result of the attention given by Gov. Doug Ducey's reelection campaign to the amounts paid by ASU to the Democrats' gubernatorial nominee, David Garcia. (Arizona's Politics has requested details on the number of classes and students taught.)

Also of interest is that Sen. Kyl received $26,000 compensation for being on the Board of Managers for Sandia National Laboratory. The NTESS is a wholly owned subsidiary of Honeywell, operating for the U.S. government.

As noted, Senator Kyl provided lobbying and legal services as a Senior Of Counsel at the large law firm of Covington & Burling. Some of his lobbying clients had been previously disclosed and covered by Arizona's Politics. Among the most significant of these was his work lobbying for the confirmation of Neil Gorsuch to the U.S. Supreme Court, on behalf of the dark money Judicial Crisis Network. He also lobbied for "Big Pharma" (Pharmaceutical Research & Manufacturers of America), Facebook, Qualcomm and others; a number of these clients receive federal monies and/or have business in front of Congress.

Among the 23 "legal/advocacy" clients he has disclosed in this new report are several not previously disclosed. Among those are APS/Pinnacle West, MGM Resorts, Republic Services and SRP. Arizona's Politics has reported extensively on APS' involvement in Arizona politics, including on behalf of Gov. Ducey.** (Please note, lobbying disclosure laws have been left purposefully vague as to what activities are required to be publicly disclosed, and related revolving door laws permit Kyl to now resume some "legal/advocacy" activity.)

Interestingly, even with these newly-disclosed lobbying clients, the public does not have a complete picture of who Sen. Kyl advised before Ducey appointed him to (temporarily) fill the late Senator John McCain's Senate term. The new report notes that "the identity of 9 clients is withheld" due to ethical rules. Thus, it is not known whether any of those clients had business before the Senate during these past several months nor whether Sen. Kyl took any actions on their behalf. It is, of course, possible, that Sen. Kyl separately disclosed those clients to the Senate's Ethics Counsel; however, that seems unlikely because he probably would have noted that in this report.

Of final note is that the new report indicates that Jon and Caryl Kyl's net worth increased more than seven fold in the 5 1/2 years between his Senatorial stints. In 2011 - after he announced that he would not run for reelection in 2012 - Arizona's Politics examined his previous financial disclosure statements. With a median calculated net worth then of just over $600,000, Kyl was one of the less wealthy members of the Senate. (And, in fact, his net worth had increased approximately 1.1% annually while he was in the Senate.)

Many speculated then that he would use his national stature to increase his net worth substantially after leaving the Senate. Those people were correct. In 2012, the Kyls' net worth was estimated to be approximately $694,000.*** In the new report, their net worth is estimated to be $5,168,500.

Senator Kyl has been asked for his comments on the specific items raised by his report and this article. Arizona's Politics will update this article as warranted.

*Noteworthy in its absence is the federal pension Kyl receives for his many previous years of public service in the Congress. Arizona's Politics had previously estimated his annual pension checks to total more than $120,000.
**Also noteworthy is that Kyl indicates that he was a board member for Prosper, Inc. We have reported on Prosper's spending supporting APS positions and the nexus between Ducey and Prosper founder/former Ducey Chief of Staff Kirk Adams.
***This is an imperfect measure, as federal laws require reporting asset values within certain ranges, and do not require that a Senator report the value of their home. The generally-used methodology thus uses an average of the low end of the range and the high end of the range, and does not reduce that by any liabilities (mortgage, etc) related to the home.

This article was contributed by Arizona attorney Paul Weich.

We welcome your comments about this post. Or, if you have something unrelated on your mind, please e-mail to info-at-arizonaspolitics-dot-com or call 602-799-7025. Thanks.
Posted by Mitch M. at 2:54 PM