Three of Arizona's four Republicans in the U.S. House voted this afternoon against a resolution disapproving of President Trump's recent move to ease sanctions on some Russian entities. The resolution was overwhelmingly approved by both Democrats and Repubicans and passed 362-53.

The text of the resolution is simple enough that it can be captured in a single screen shot (below). The Senate voted on the resolution earlier this week, but the 57-42 majority failed to reach the 3/5 necessary; both of Arizona's Senators voted their disapproval of easing sanctions on Russian oligarch Oleg Deripaska.

The three have not yet released statements explaining their vote. Arizona's Politics will update as necessary. 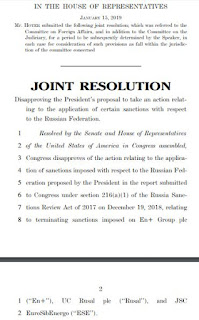 We welcome your comments about this post. Or, if you have something unrelated on your mind, please e-mail to info-at-arizonaspolitics-dot-com or call 602-799-7025. Thanks.
Posted by Mitch M. at 11:29 AM