It's official - Arizona now has two new Senators. And, although the Senate followed protocol and swore in all 34 Senators in alphabetical order, Kyrsten Sinema will be Arizona's "Senior Senator" while Martha McSally will be the "Junior Senator."

However, the Senate had a different idea, and proceeded to swear in 34 Senators - new, returning, elected, appointed - in groups of four, alphabetically. Thus, technically speaking, McSally was sworn in before the woman who narrowly defeated her in November.


"Kyrsten Sinema is Arizona's senior senator and the first woman senator from Arizona. The election canvass that took place Dec. 3, prior to Martha McSally's appointment, is the deciding factor. Order today was done alphabetically but does not determine seniority."

He acknowledged that the Senate could have "avoided confusion" by swearing in McSally after those who were elected, "but the end result is the same."

While most of the Senators sworn in were accompanied by their states' other Senator, Sinema and McSally did not have that option. McSally was presented by Iowa Senator Joni Ernst**, and Sinema was presented by Flake. (As we know, Sen. Kyl was in Phoenix yesterday.)

McSally has already filed a statement indicating that she will be running in the 2020 special election to serve out the remainder of the late Sen. John McCain's term.

Here is the Arizona portion of today's swearing in: 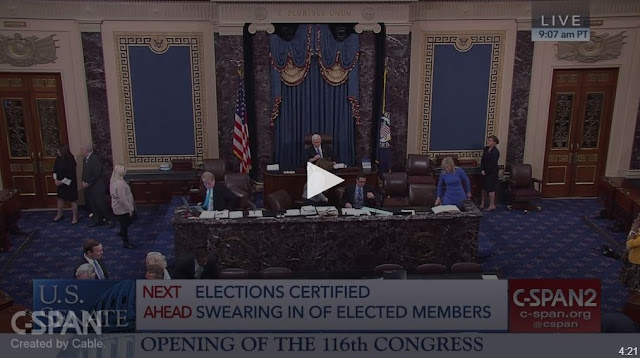 *Flake also switched from "Junior" to "Senior", upon John McCain's passing, and Kyl was "Junior" for all of his two stints in the Senate.
**h/t to eagle-eyed Brahm Resnik, KPNX. 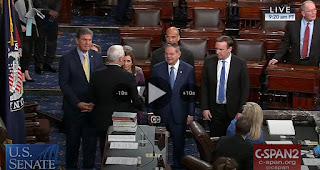 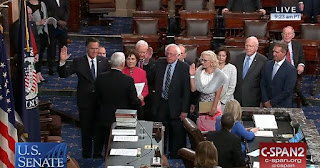 We welcome your comments about this post. Or, if you have something unrelated on your mind, please e-mail to info-at-arizonaspolitics-dot-com or call 602-799-7025. Thanks.
Posted by Mitch M. at 12:34 PM