UPDATE: Judge Expedites Hearing On House Republicans' Battle Against Proxy Voting - But, Not Until July 24

On Friday, House Republicans amended their lawsuit against House Speaker Nancy Pelosi and the House's resolution allowing proxy voting during the current pandemic, and asked the Judge to set a June 19 hearing. Today, Judge Rudolph Contreras agreed to an expedited hearing, but set it for July 24.

The House also just filed their initial response to the suit, saying that the resolution permitting the 45 day period of proxy voting is constitutional, and suggested that the Republicans' case cannot be heard by the Court. They suggested that the Court set a slightly lengthier time schedule for the parties to brief the issues.

The Court favored that suggestion.

Also, Arizona Representatives David Schweikert (R-CD6) and Paul Gosar (R-CD4) joined the Republicans' Amended Complaint on Friday. Reps. Debbie Lesko and Andy Biggs were among the initial plaintiffs, and all of Arizona's Republican Representatives are now part of the suit.

* * * * *
UPDATE, 5/29, 3:45pm: The group of Republicans suing over proxy voting today asked the Court to hold a hearing on June 19 on their request for a preliminary injunction. The plaintiffs - including Arizona Reps. Debbie Lesko and Andy Biggs, also amended their complaint today.

* * * * *
AZ Reps. Biggs, Lesko Among GOP Group Suing Pelosi Over Proxy Voting (READ, Complaint)
Arizona Reps. Debbie Lesko (R-CD8) and Andy Biggs (R-CD5) are among a group of 21 Republican Representatives to file suit yesterday against the U.S. House of Representatives for changing its rules to allow for proxy voting and remote working during the pandemic. 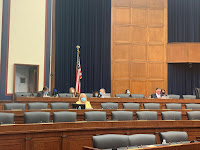 The suit claims that the U.S. Constitution requires in-person voting. Democratic Arizona Reps. Raul Grijalva (D-CD3) and Ann Kirkpatrick (D-CD2) have given their proxies to other members, and Reps. Ruben Gallego (D-CD7) and Tom O'Halleran (D-CD1) have accepted proxy responsibilities for three other Representatives (from other states).

The Republican argument is similar to the one that the State of Arizona successfully made last month in opposing efforts to permit digital signing of initiative petitions using the state's E-Qual system. However, in that case, the Arizona Constitution explicitly said that the signature must be "signed in the presence of" the circulator. Yesterday's suit relies on traditional interpretations of the word "meet" and "assemble". (Odd side note: the Complaint also cites the Impeachment Clause for support.)

Here is the Complaint filed yesterday in the federal District Court in DC. Arizona's Politics will keep readers updated on the progress of this suit.
*