When a student's complaints about a World Politics quiz that dealt with Muslims and terrorism went national a month ago, Scottsdale Community College focused on the social media reaction at the expense of the professor. The Maricopa County Community College District today made public an investigative report into the incident. 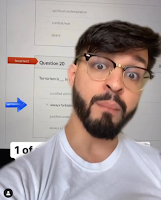 On April 29, a Muslim student complained about the impression that several questions may give to non-Muslim students in the class. He publicly posted the questions/answers, which immediately went viral when a well-followed Michigan comedian posted a video on his Instagram page.

These were the questions/answers at issue, according to the report:

SCC "deeply apologize(d)" for the questions and agreed that they were "inaccurate" and "inappropriate". However, immediately after the incident, Professor Nicholas Damask's quiz and course material were reviewed by his Division Chair and found to be "appropriate". SCC's Administration ignored that finding when issuing the apology.

MCCCD then stepped in and criticized the "rush to judgment". They asked well-respected Phoenix attorney Dan Barr at Perkins Coie to conduct an investigation into how the uproar was handled and whether SCC tried to interfere. with the investigation.

Today's report finds that the district's policies and procedures were not followed in this case.  It found that "the focus of the SCC administration was deciding how to respond to and placate critics on social media," while paying little attention to the actual quiz questions/answers or the exchanges between the professor and student.

SCC's Public Relations/Marketing Manager Eric Sells was in charge of the response.  "While Sells was motivated by good intentions to protect SCC's reputation, Sells has limited experience in higher education and did not appear to have an understanding of the District's policies on academic freedom or procedures for dealing with student complaints."

The report then notes that the Administration did not "give much, if any" consideration to procedures, nor did they attempt to consult with the College's legal office. The report also finds that the District "largely left the College to handle the response itself."

MCCCD says today that Interim Chancellor Steven R. Gonzales "will take the appropriate time to consider the full report and make a determination on the way forward with the best interest of the System in mind."

We welcome your comments about this post. Or, if you have something unrelated on your mind, please e-mail to info-at-arizonaspolitics-dot-com or call 602-799-7025. Thanks.
Posted by Mitch M. at 2:59 PM