Arizona has begun privatizing its 25 highway rest stops this month.  The companies taking over management of the places where an estimated 9.3 million people per year stretch their legs, "use the facilities", or take a quick nap are going to maintain the areas and monetize them by attracting advertisers.

Although there are some questions surrounding how this public-private partnership ("P3") has reached this point - see accompanying article "Governor Brewer's Personal SuperPAC Benefits From Privatizing Rest Stops" - the new 5-year agreement puts Arizona into the company of only a handful of states privatizing and/or commercializing their rest areas.

Arizona Department of Transportation ("ADOT") has not yet released the amount that they will pay Infrastructure Corporation of America ("ICA") - out of Tennessee - and their partners, claiming that the arrangement is not yet finalized.  Nor is the percentage of advertising revenues that the state will receive yet known.  However, that is not stopping ICA and its advertising subcontractor ITSAA  from getting to work and boasting about the public-private partnership to potential advertisers (and other states). 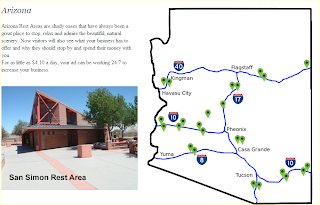 Arizona Rest Areas are shady oases that have always been a great place to stop, relax and admire the beautiful, natural scenery. Now visitors will also see what your business has to offer and why they should stop by and spend their money with you. For as little as $4.10 a day, your ad can be working 24/7 to increase your business."
And ICA brags about its five-year agreement with the state, states that the revenue streams are a "crucial component" of the arrangement and that it will assume "routine maintenance activities and janitorial services" at the rest stops. 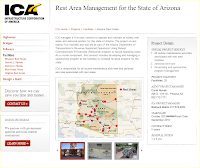 According to the Request for Proposals ("RFP") - not available on ADOT's website but reviewed by Arizona's Politics - the state did give them a host of content restrictions on acceptable ads.  There will be no ads for products or services with sexual overtones, concerning abortion or euthanasia, alcohol, tobacco, firearms, political candidates or ballot measures, nor ads that denigrate other groups (on basis of gender, religion, race, ethnicity or political affiliation).

ICA/ITSAA are to give the state its share of gross advertising revenues twice a year.

The nearly-finalized agreement has been in the works for a couple of years now, and has largely been flying under the (toll road) radar.  In 2009, Arizona passed a new law envisioning possible P3's, but toll roads were the focus.  In 2011, ICA first made an unsolicited proposal to ADOT.  (It appeared that they may have submitted a new proposal in early 2013.)  It was put out for competing proposals in February 2013, but only one other, "non-responsive" proposal was received, according to ADOT spokesperson Laura Douglas.

Although ADOT's flow chart for processing such unsolicited proposals is quite detailed,
Douglas states that the flow chart "is geared more toward highway projects" and that approval from the State Transportation Board was not necessary.  The Director of ADOT, John Halikowski, had the final decision; Halikowski was appointed by Governor Jan Brewer in 2009.  (The Governor's personal Super PAC received a large contribution from ICA, and ICA apparently hosted a successful fundraiser for JanPAC in February of this year.)

ICA and ITSAA provide similar services for Florida and Missouri, and ICA maintains rest areas for Texas and Virginia.  The other company that submitted a (rejected) proposal earlier this year, Travelers Marketing, provides a variety of advertising services for a number of states, but it is not clear whether rest areas are part of those services.

We welcome your comments about this post. Or, if you have something unrelated on your mind, please e-mail to info-at-arizonaspolitics-dot-com or call 602-799-7025. Thanks.
Posted by Mitch M. at 2:17 PM