Last week, Arizona's Politics reported that Arizona's Department of Transportation had agreed to privatize control of 25 highway rest areas in the state, paying Tennessee-based Infrastructure Corporation of America ("ICA") to maintain the rest stops and ICA/ITSAA to sell advertising in and around the rest stops.  The proposal was not discussed at public meetings, and the contract had not yet been finalized.  To Arizona's Politics knowledge, the contract has still not been signed.

However, as the below screenshots from ITSAA (this afternoon) show, the companies are moving forward. (ICA did remove its Arizona page the day after it was pointed out to ADOT by Arizona's Politics.) 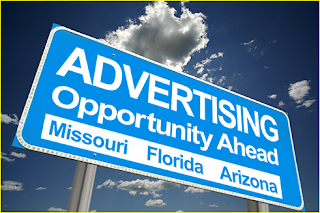 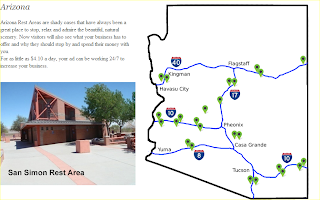 The public-private partnership has raised eyebrows because ICA donated $10,000 to Arizona Governor Jan Brewer's personal Super PAC ("Jan PAC"), and apparently hosted a successful fundraiser for Jan PAC, the same weekend that ADOT put the rest area privatization plan out for Requests for Proposal.  (ICA had earlier submitted an unsolicited proposal which prompted the state's RFP.)

(Clarifications/addendums, 9/26/13, 3:00pm:  Explained at bottom of article.)  As of this afternoon, ADOT informs Arizona's Politics that "there is not yet a final signed contract."

Also, the lede sentence below has been modified to indicate that it is only control of the rest areas - maintenance, advertising, improvement - that is being contracted out; use of the word "privatize" does not mean that the state is turning over ownership of the rest areas. The updated lede adds the words "control of".  The definition of "privatize" varies depending upon the source - to some, it indicates change of ownership while to others, it indicates change of control.  e.g. Merriam-Webster

Finally,  in response to a comment below and Arizona's Politics' e-mail, ADOT indicates that it did provide the Federal Highway Administration with a copy of the RFP, as a courtesy, and that there was no formal signoff required.)

We welcome your comments about this post. Or, if you have something unrelated on your mind, please e-mail to info-at-arizonaspolitics-dot-com or call 602-799-7025. Thanks.
Posted by Mitch M. at 12:23 PM

Has the USDOT signed off on this? My understanding under the law creating the Federal interstate system that rest stops along interstate highways may not be privatized..

If it just privatizing the maintenance of the facilities that is one thing, but if it putting the rest stop under the management of the private company, that is quite another.