In the previous article, we posted video and a transcript of Arizona Senator John McCain's speech on the floor of the Senate yesterday honoring the 20th anniversary of the Americorps program.  Because he was so fulsome in his praise, Arizona's Politics was prompted to take the time machine back to 1993 and see how closely his speeches matched.  They do not.

McCain spoke out strongly against the Americorps program in 1993, acknowledging that it was about to pass, and saying "what we have done in the name of national service, which is a concept which I support, is created another bureaucracy at a cost of untold billions of dollars which undermines other programs and in some ways undermines what voluntarism is all about in this country."


To the Senator's credit, he has acknowledged his change of heart.  When he was first running for President in 2000, he flat out admitted, "I was wrongabout AmeriCorps... I was extremely skeptical at first, mostly because I didn't trust the authors. But I've got to say that, over all, the program's been a success. And it was a failure on my part not to recognize that earlier." (originally in The New Yorker magazine)


9/8/93:
Mr. McCAIN. I thank the Chair.
I rise in opposition to this conference report. As my colleague from Washington just stated, it is somewhat paradoxical--it would be amazing if it were not for the fact there are so many taxpayers involved--that on the day after with great hullabaloo we celebrate the attempt to reinvent Government and streamline, reduce the size of the Federal bureaucracy, we will now create, at least according to this bill, I believe, a $1.5 billion bureaucracy over the next 3 years. The President's budget as submitted called for over $10 billion in spending.
I cannot help but wonder--my academic curiosity is aroused--as to how many bureaucrats will be required to run this so-called volunteer program. The fact is that no program in the last 30 years that has been created has been kept within
the size of the original estimated budget, nor has it kept within the originally envisioned size of the bureaucracy.
I believe what we are doing in this case really flies in the face of what voluntarism is all about. In 1989, which is the last year we have these figures, 38 million people performed voluntary community service. This program will now pay 150,000 of them for their efforts. I wonder how the other 37,850,000 will feel.
I think this program fails to accomplish its stated goal of expanding educational opportunity, when we look at the fact it will benefit 150,000 people by 1997, contrasted with the 6 million students who are currently assisted through Federal guaranteed loan programs. As I mentioned, the conference report provides for expenditures of $1.5 billion over the next 3 years. I wonder where that money is coming from. In this period of fiscal austerity, when we are putting our men and women in uniform on the streets, those who volunteered for military service we are now forcing out of the military because we tell them we cannot afford to keep them, it seems somewhat incomprehensible we are creating a new Federal program.
Moreover, as we all know, it would be nearly impossible to eliminate or reduce the program if it does not work as advertised.
According to figures that I have, this national service program could cost up to $22,000 per participant per year compared with just $4,000 per student per year for existing grant and loan programs. Moreover, although it has been compared to VISTA and the Peace Corps, it is a white elephant in comparison. The Peace Corps received a total of less than $4 billion in support over 31 years. The 1992 Peace Corps budget is $200 million. VISTA's budget is just $37 million.
Mr. President, what we have done in the name of national service, which is a concept which I support, is created another bureaucracy at a cost of untold billions of dollars which undermines other programs and in some ways undermines what voluntarism is all about in this country.
I have no doubt that we will approve of this legislation, but it will not be with the vote of this Senator.
Mr. President, I yield back the remainder of my time. 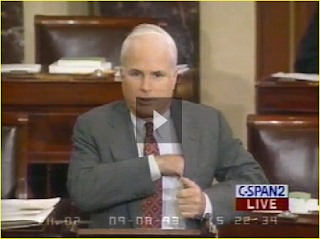 We welcome your comments about this post. Or, if you have something unrelated on your mind, please e-mail to info-at-arizonaspolitics-dot-com or call 602-799-7025. Thanks.
Posted by Mitch M. at 5:06 PM