After Senator Ted Cruz (R-TX) finished his 21-hour filibuster/talk-a-thon to try to defund Obamacare, Arizona Senator John McCain took to the Senate floor to take issue with his colleague's taunting of fellow Republican Senators for not working hard to "replace and repair Obamacare."

McCain noted his efforts and votes against the Affordable Care Act (aka Obamacare) in the past and said that "elections have consequences." He argued that Cruz' effort was not a filibuster and called it an "extended oratory."

"I resoundingly reject that!  That allegation in my view does a great disservice"  A disservice to those who did "stood up and shouted at the top of their lungs" or go to war.  McCain said he spoke to Cruz about this afterwards and that Cruz indicated that he did not intend it to apply to any Senators - only to "pundits".

(Click on picture below for video, in new window.) 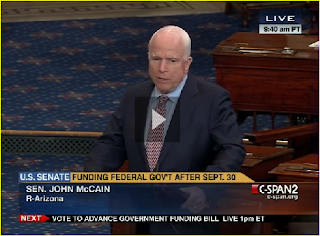 (As part of his filibuster/extended oratory, Cruz read "Green Eggs and Ham", by Dr. Seuss.  Arizona's Politics noted that Arizona Rep. Paul Gosar (R-CD4) had adapted that famous story to attack Obamacare more than 14 months ago, on the House floor.  Video and other tidbits are available here, and a follow-up featuring Tucson progressive blogger/attorney Michael Bryan's counter-version is available here.)


http://cs.pn/18pIWIa
We welcome your comments about this post. Or, if you have something unrelated on your mind, please e-mail to info-at-arizonaspolitics-dot-com or call 602-799-7025. Thanks.
Posted by Mitch M. at 11:39 AM