Arizona's rural Congressional District 1 is rated as one of the most competitive in the nation for 2014, and the Republicans now have an announced challenger to incumbent Rep. Ann Kirkpatrick (D-CD1).  Springerville/Eagar native Gary Kiehne filed his statement of candidacy this week. 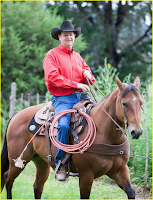 Kiehne (pronounced Keen-ee) is a "a 5th generation cattle rancher and business owner" in Springerville who won a professional roping competition earlier this summer.  He has spoken out about "U.S. Forest Service mismanagement" and the need to allow more logging - which is probably why he contributed money last year to Rep. Raul Grijalva's (D-CD3) opponent last year.  (He previously has contributed to Rusty Bowers' Congressional run and Sen. John McCain's most recent re-election effort.)

Interestingly, his papers were filed with the Federal Election Committee on Tuesday by his campaign committee's Treasurer, David Satterfield.  Satterfield works for national law firm Arent Fox and has handled various national campaigns.  (This also explains why Kiehne's paperwork lists the campaign's post office box as being in "Eager", Arizona.)

Although CD1 is listed by the respected Rothenberg Political Report as one of the 14 closest Congressional races for next year ("Toss Up/Tilt Democrat"), no Republicans had announced their candidacy until Kiehne. Kirkpatrick has nearly $450,000 in her re-election bank account. If Kiehne is the GOP nominee, it will be a general election contest between two native eastern Arizonans.

Arizona's Politics has asked Kiehne for an interview, and will update as appropriate.  (Note to candidate: if nothing else, the "Donate" button on your website should  be operational.)

(UPDATE, 9:55am: Added sentence about Kirkpatrick's cash on hand as of June 30.)


We welcome your comments about this post. Or, if you have something unrelated on your mind, please e-mail to info-at-arizonaspolitics-dot-com or call 602-799-7025. Thanks.
Posted by Mitch M. at 9:41 AM

So far so good. He sounds like he will be a candidate FOR THE PEOPLE.