The week that a major Request for Proposals went out to privatize the state's highway rest areas, Arizona Governor Jan Brewer was hosted in Tennessee and her personal Super PAC received contributions and underwriting from the Tennessee company proposing the public-private partnership.

Tennessee-based Infrastructure Corporation of America ("ICA") has announced on its website this week (removed this morning after Arizona's Politics pointed it out) that it is now in control of providing maintenance and janitorial services at 25 state-owned rest areas across the state.  (See accompanying article, "Arizona Privies Privatized (Pretty Privately)!  Tennessee Company Takes Over Highway Rest Stops, Now Looking For Advertisers")

In 2011, ICA first proposed a public-private partnership with Arizona for its rest areas, according to Arizona Department of Transportation ("ADOT") spokesperson Laura Douglas.  It previously appeared to Arizona's Politics that a second unsolicited proposal from ICA was submitted in early 2013, although the ADOT link to that information was removed; Douglas indicates that the website was "recently redesigned".

In 2009, Arizona passed the law envisioning P3's - with a focus on toll roads - and ADOT produced (in 2010) the flowchart at right (click to expand) detailing the process for unsolicited proposals. 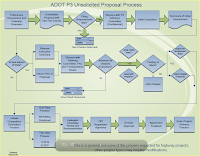 Whether ICA's proposal was submitted once in 2011 or a second time in 2013, it is clear that ADOT decided to move forward with the idea and put out a Request for Proposals ("RFP") on or about February 22, 2013.  The RFP is not currently available, and Douglas informs Arizona's Politics that, per state law, it will be after the contract is finalized: "The executive summary for the unsolicited proposal is the only document that we can release right now, per state law."  Arizona's Politics has determined that the statute does not envision that the RFP is confidential, and is reproduced below the jump.

On February 19, 2013, ICA made a $10,000 contribution to the Governor's eponymous "Super PAC', Jan PAC.  On February 21 and 23, ICA also made matching in-kind contributions to Jan PAC and the Republican Governors Association for "transportation"; each contribution was for $6,435.

Between February 19 and February 22, Governor Brewer's Jan PAC received more than $60,000 in contributions from Tennessee donors, apparently at a fundraiser on her way to the Republican Governors' Association Winter Meetings in Washington D.C.

Governor Brewer's SuperPAC was the only (federal) recipient of the ICA-sponsored fundraiser, which may have been organized by either ICA,, repeat Brewer contributor Willis Johnson/Copart - which owns automobile auctions nationwide, including Arizona.  Johnson donated $10,000 on February 21, to bring his total support of JanPAC to $120,000 - or another major contributor.

The more than $60,000 (the amount could vary depending on whether all of the Tennessee contributors were as a result of the fundraiser and whether other, out of state donations were related) collected included $10,000 from the Tennessee owners of Pilot Oil, which has highway fuel stations/travel stops around Arizona.  The Haslams also made $50,000 in donations on February 22 to the Republican Governors' Association.

ICA was then the only company to submit a "responsive" proposal to ADOT's RFP - a proposal from a Massachusetts company that partners with several states to provide transportation-related with advertising was found to be "non-responsive", according to Douglas.  The decision to move forward with ICA was made by ADOT Director John Halikowski.

Governor Brewer set up her eponymous Super PAC in 2011.  By law, she is permitted to spend the money in the account on any independent expenditure campaigns of her choosing.  In 2012, she spent more than a quarter of a million dollars on behalf of now-Senator Jeff Flake and three unsuccessful GOP House candidates.  She has also received media attention for using the monies to purchase copies of her book "Scorpions For Breakfast: My Fight Against Special Interests, Liberal Media and Cynical Politicos."

Whether the contributions - to a Super PAC apparently controlled by the Governor, for her political benefit - coming at the same time that the government contractor is avidly pursuing a proposal to privatize state assets runs afoul of any state laws regarding gifts depends on a number of factors.  The recent advent of Super PACs at the federal level has opened up new avenues to support elected officials or candidates - even for those at the state or local level.


We welcome your comments about this post. Or, if you have something unrelated on your mind, please e-mail to info-at-arizonaspolitics-dot-com or call 602-799-7025. Thanks.
Posted by Mitch M. at 2:19 PM

Maybe the FBI will open an investigation, as this all has the distinct smell of political corruption through bribery. Not that I would hold my breath that the FBI would actually follow through with charges if they did investigate (see Sheriff Arpaio for an example).

Good article but didn't it chicken out at the end? It conects most of the dots but doesn't make the conclusion. Even without a confession it should have accused her.

Thanks, PJ and Anon.

I agree on the not holding breath idea. In putting together these articles, I was working under the assumption that most readers would yawn and say "same old, same old."

And, y'know what, it IS the same old, same old... with a new (Super PAC) twist. But, it doesn't mean we should not bring it into the sunlight.

Anon, I can understand your point. I purposely left it without an accusation of wrongdoing. I do not have the legal power to question anyone in this case under oath, nor even the media clout to get any of the principals to give me a reaction on camera or on the phone or by e-mail. Therefore, I could not connect enough dots to definitively figure out the picture.

Our governor is such a moron. Outsourcing jobs and profit to another state. She can't ever see beyond her own pocketbook and aspirations. Keep Arizona jobs and money here.

Thanks for commenting, Anon. I don't think (m)any JOBS will be outsourced in this P3, but you certainly make a valid point regarding PROFIT. The state could have prioritized getting Arizona businesses (janitorial, advertising) involved.