The Arizona Supreme Court unanimously upheld a lower court opinion finding that DACA recipients (aka DREAMers) are not entitled to in-state tuition at Arizona colleges and universities.

The Supreme Court's announced their decision today, one week after holding oral argument on the matter. Their written opinion will be drafted and released within the next five weeks.

However, in the 2+ page order, the Court advises that the Legislature could pass a law that would permit the state's colleges and universities to grant in-state tuition to DACA recipients who graduated high school here. The Order notes that three of Arizona's neighbors - California, Colorado and New Mexico have done so.

HOWEVER, the Court warned that such an effort "may be subject to the Voter Protection Act"; that is to say, in 2006, Arizona voters approved Prop. 300, which banned state colleges and universities from providing in-state tuition to "non-qualified aliens."

Here, also, is the lower court's unanimous opinion, which the Supreme Court upheld today. It overturned the trial judge's decision that the students are statutorily entitled to in-state tuition because they became "lawfully present" after President Obama instituted Deferred Action for Childhood Arrivals ("DACA").

President Trump has rescinded the DACA Executive Order. However, that action is also tied up in federal courts. 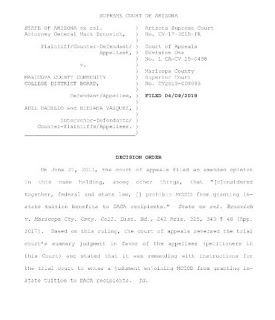 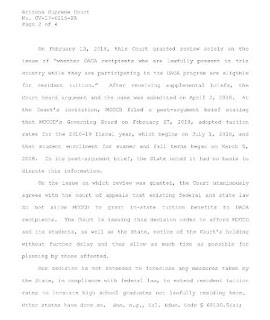 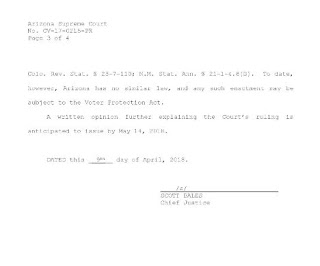 We welcome your comments about this post. Or, if you have something unrelated on your mind, please e-mail to info-at-arizonaspolitics-dot-com or call 602-799-7025. Thanks.
Posted by Mitch M. at 12:26 PM