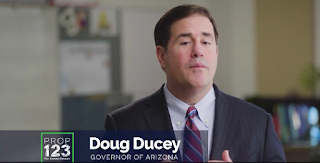 (UPDATE, 5:30pm: The Governor's Office responded following publication, telling Arizona's Politics that $695,077.49 has been spent on attorneys' fees for the case. No supporting documentation or list of other cases has yet been provided. Nevertheless, the headline and article have been updated)

The legal challenge to Arizona's Prop. 123 on education funding is still (technically*) in its early stages, but Arizona Governor Doug Ducey's office has apparently already spent approximately $700,000 in legal fees defending it. Nearly 3/5 of that has been paid to retain high-powered attorney Ted Olson (and others at the firm) - the same Olson who last month rejected President Trump's efforts to hire him.

On March 26, U.S. District Court Judge Neil V. Wake denied the Governor's Motions To Dismiss the challenge to the voter-approved Propositions in 2012 and 2016. Those measures allowed the state to invade the principal of the state's land trust. Judge Wake is now asking the parties to argue the effect of a provision in the omnibus spending measure which blessed the Propositions retroactively; that blessing was approved by Congress and signed by the President in March.**

The Governor's Office has retained partners Theresa Dwyer and Tim Berg at Arizona law firm Fennemore Craig, and former U.S. Solicitor General Ted Olson and Matthew McGill from mega-firm Gibson, Dunn & Crutcher. In the less than two years since the case was filed, the two firms have billed the Governor's Office

Arizona's Politics compiled the paid invoices from the state's website and confirmed them with the Governor's Office. However, the Governor's Office indicated to Arizona's Politics - on the day the Judge's ruling was reported on - that the law firms may be representing it in other matters. Therefore, They Governor's Spokesman Patrick Ptak has now confirmed to Arizona's Politics that $695,077.49 has been paid to the two firms  have not confirmed the $753,575 is only for the Props. 118 & 123 case... while also not providing a list of the other legal matters that may be included in the bills. Gibson Dunn & Crutcher has been paid $406,093.59, while Fennemore Craig has received $288,983.90. The difference would indicate that Fennemore Craig has received at least $68,000 for other matters in which it represents the Governor's Office.

Arizona's Politics will update this article once further information from the Governor's Office is received.


*No answer has yet been filed by the Governor's Office, because the Motions To Dismiss were pending.**Sidenote: Interestingly, most of Arizona's Congressional delegation voted against the omnibus package - though for different reasons. Only Reps. Tom O'Halleran (D-CD1), Martha McSally (R-CD2), and Kyrsten Sinema (D-CD9) voted aye.

We welcome your comments about this post. Or, if you have something unrelated on your mind, please e-mail to info-at-arizonaspolitics-dot-com or call 602-799-7025. Thanks.
Posted by Mitch M. at 4:10 PM