Leaders of the coalition that collected more than 144,000 signatures to place a referendum of an election reform law onto this November's ballot rallied today at the Capitol to urge state Republican leaders to pledge to not remove it from the ballot without promising to prevent piece-by-piece reenactments.

Seeing as how it was another beautiful, dry, warm Arizona day and that I happened to be in the neighborhood, I stopped by to watch Julie Erfle, the chair of the Protect Your Right To Vote Committee, Libertarian Barry Hess and activist Randy Parraz urge Governor Jan Brewer and Legislative leaders Andy Tobin and Andy Biggs to pledge to fight any bills that would re-enact pieced of H.B. 2305 (2013) piecemeal.  (click on picture below to expand) 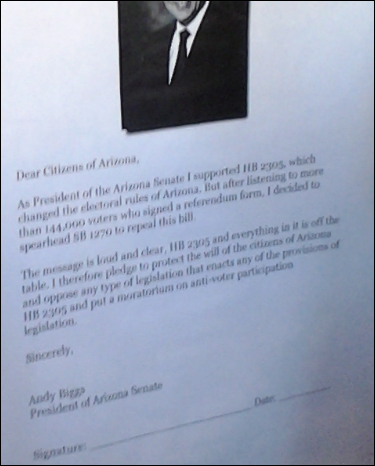 Hess, who is running for Governor on the Libertarian ticket (for the 4th consecutive time, receiving an increasing portion of the vote each time), had the most quotable line.  He warned Republicans to not remove the referendum and then re-enact, "To win by exclusion is the lowest of the low, the cheatingest of the cheatingest."

Parraz, who led the unsuccessful effort to recall Maricopa County Sheriff Joe Arpaio, burned a copy of the referendum petition as a visual warning

of what the GOP lawmakers were on the verge of doing (if they repeal/re-enact).  Parraz then led supporters up to the 2nd floors of the House and the Senate to ask House Speaker Andy Tobin (now also running for Congress) and Senate President Andy Biggs to sign the pledge.  Neither came out (it was lunch hour on a holiday), and the cheerful protesters were told to leave or risk arrest.

For another article, Arizona's Politics has also been asking the Governor's office for her feelings about the original bill (she did not make any public comments when signing) and about the possible repeal/re-enactment.  We have not received a response.