Maricopa County Sheriff Joe Arpaio is using his fundraising prowess in Georgia tonight, helping "close friend" Bob Barr in his attempt to win a Congressional seat being vacated by Rep. Phil Gingrey (who is running for the Senate). 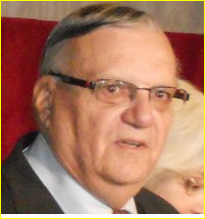 Barr, who was the Libertarian presidential nominee in 2008, has returned to the GOP's tent.  In the fundraiser invitation (below, courtesy of the Sunlight Foundation), Barr promises to "be just as tough on Obama as Sheriff Joe has been on crime in Arizona."

Barr is in a wide-open scramble for the Republican nomination.  He has raised more money than any of his opponents, but has less cash on hand than two of them.

Arpaio has contributed $5,000 to Barr's campaign from his federal Super PAC.


A Private Reception with America's Toughest Sheriff  for Bob Barr

We welcome your comments about this post. Or, if you have something unrelated on your mind, please e-mail to info-at-arizonaspolitics-dot-com or call 602-799-7025. Thanks.
Posted by Mitch M. at 5:12 PM

That is positively scary.

Which part, PJ? There are several possibilities. (Including, what would've happened to Maricopa County Law Enforcement if the Sheriff had gone a week or two earlier and had been stranded on the Atlanta freeways for a couple of days after the snow storm!!!)