In a turnabout, President Barack Obama pointed a finger at Arizona Governor Jan Brewer (and, the other Republican Governors who expanded Obama lauded those who took the politically-risky option: 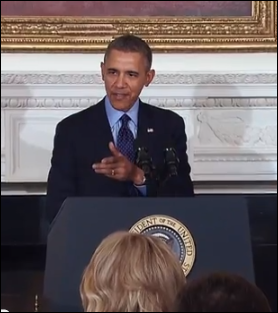 Medicaid as part of the Affordable Care Act (Obamacare) law.  At a meeting of the National Governors' Association yesterday, he did not call them out by name, but:


"And while Congress talks about repealing the Affordable Care Act or doing this or doing that to it, places like California and Kentucky are going gangbusters and enrolling more Americans in quality, affordable health care plans. You’ve got Republican governors here -- I won’t name them in front of the press, because I don’t want to get you all in trouble -- who have chosen to cover more people through new options under Medicaid. And as a result, millions of people are going to get help.

States that don’t expand Medicaid are going to be leaving up to 5.4 million Americans uninsured. And that doesn’t have to happen. Work with us to get this done. We can provide a lot of flexibility. Folks like Mike Beebe in Arkansas have done some terrific work designing programs that are right for their states but also provide access to care for people who need it. And I think Kathleen Sebelius, a former governor herself, has shown herself willing to work with all of you to try to find ways to get that done."

(Emphasis added, the clip begins at about the 10:10 mark in the video below.)

We welcome your comments about this post. Or, if you have something unrelated on your mind, please e-mail to info-at-arizonaspolitics-dot-com or call 602-799-7025. Thanks.
Posted by Mitch M. at 2:05 PM