Arizona Rep. Ed Pastor (D-CD7) already had one filed challenger in the Democratic primary before announcing that he will not run for re-election, and it was a candidate with built-in name recognition.  Cesar Chavez filed his candidacy papers more than two weeks ago. 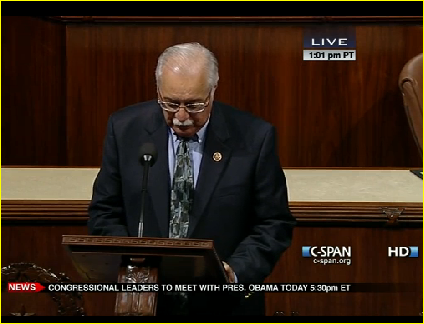 Arizona's Politics had made some unsuccessful efforts to reach and learn more about this Mr. Chavez -bothering another gentleman with the same name, but making no attempts to reach the better-known, late Cesar Chavez.  Chavez has an un-illustrative website, and he may be perfectly following in Pastor's footsteps.

Pastor has been in the U.S. House of Representatives since 1991, and is the least visible member of Arizona's current delegation (earning him the "Phantom of the House" designation from Arizona's Politics).  (Ironically, Pastor was awarded "the 2000 Cesar Chavez Community Leadership Award", by ASU.)

Pastor has more campaign cash in the bank than any other Arizona House member or opposing candidate.  He ended 2013 with $1,355,738 at the ready for a re-election effort.  (He had previously filed his 2014 statement of candidacy, but that was a necessity to accept any campaign donations; it did not necessarily mean that he then intended to run.)

We welcome your comments about this post. Or, if you have something unrelated on your mind, please e-mail to info-at-arizonaspolitics-dot-com or call 602-799-7025. Thanks.
Posted by Mitch M. at 12:47 PM