Political banter surrounding the Super Bowl (or other big sporting events) is usually pretty bland - a friendly bet between the mayors/governors/etc from the competing teams' hometowns.  Not so in the just-heating up GOP primary battle for Arizona Attorney General.

Of course, it took place on Twitter.  Incumbent GOP AG Tom Horne Tweeted a bland "who's your pick" message this morning.  Rodd McLeod - who just happens to be a spokesperson for the de facto Democratic nominee, Felecia Rotellini - apparently could not resist a jab: "I think it could be Brnovich if he runs a tight offensive line."

That got Brnovich into the action, noting that beloved former Arizona Cardinals QB Kurt Warner was, too.  Mecum got in a double slam, tweeking Warner and Brnovich in the same Tweet.* 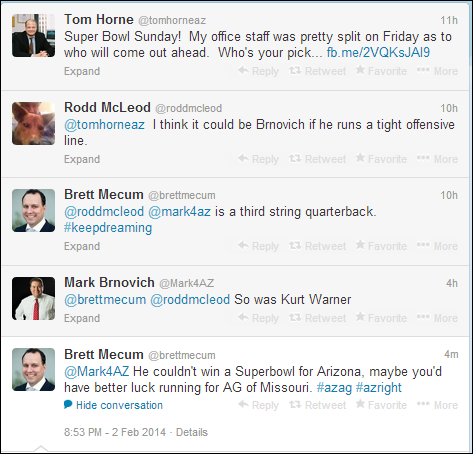 * Warner got the Cardinals TO the Super Bowl (1st time ever), completed 31 of 43 passes for 377 yards, and the Cardinals lost a close game, 27-23, to the Pittsburgh Steelers.

We welcome your comments about this post. Or, if you have something unrelated on your mind, please e-mail to info-at-arizonaspolitics-dot-com or call 602-799-7025. Thanks.
Posted by Mitch M. at 9:20 PM

Go Mark! You've got a lot if support!