Beginning today, Arizona airwaves will be flooded with 30-second TV spots for Vermont Senator Bernie Sanders. The spots will run until next Tuesday's Presidential Preference Election, when Arizona Democrats will choose between Sanders and former Secretary of State Hillary Clinton. 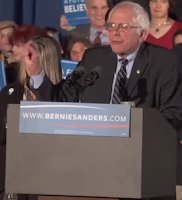 The ad buy also does not include any of the long-form Sanders commercials which Campaign Manager Tad Devine had hinted that they may be running in Arizona. (Yet.)

Sanders is also flying to Phoenix for a rally tonight, at which he will probably make reference to results from the 5 significant primaries taking place today (Florida, Ohio, Illinois, Missouri, North Carolina).

No other candidates are currently running broadcast TV ads in Arizona.  Minor, pro-life Democratic candidate Henry Hewes has made inquiries.

We welcome your comments about this post. Or, if you have something unrelated on your mind, please e-mail to info-at-arizonaspolitics-dot-com or call 602-799-7025. Thanks.
Posted by Mitch M. at 11:27 AM