Outtakes are one thing - they are unavoidable errors that are caught and re-done the intended way.  Both Phoenix City Councilmember Sal DiCiccio and his opponent in this month's hotly-contested election, Karlene Keogh Parks, have recently e-mailed out uncaught mistakes that are somewhat embarrassing.

DiCiccio's campaign sent out multiple e-mail missives yesterday, but the one that caught Arizona's Politics' eye is the one (not) citing my article on the TV ad blitz starting with today's opening of early voting.  The eye-catcher - perhaps because of the copy-editing experience in my past life - was in DiCiccio's explanation (that I was really interested in) as to why the fire fighters' union is spending several hundred thousand dollars opposing him.

The second reason DiCiccio gives is quote-worthy:  "I have consistently worked to reign in the unsustainable pension system and end the practice of pension spiking." (emphasis added)

The words "rain", "rein" and "reign" probably rank very high on the list of confusing homophone trios - maybe only falling behind "to/too/two" and "your/you're/yore" - but this error actually changed the meaning of what DiCiccio wanted to say to the opposite of what he was trying to convey.

Coupled with the fact that Keogh Parks has been attacking DiCiccio's city pension (from his previous stint on the City Council), and you have an even more unfortunate error.  (Copy of the e-mail below the jump.)

However, at least DiCiccio knows how to spell his (tricky) name.  Arizona's Politics has received not one, but too two e-mails from Keogh Parks misspelling her own name in the "To" space.  While many voters might want to spell her middle name with a "u" in the middle, she - and, her campaign personnel - should be over that tendency.  (Copy of the e-mail below the jump."

BONUS:  Since Phoenix Truth and Safety is a major player in this very contentious contest - with both the ads and the signs gaining attention here, in other media and from the voters - including them in this article is appropriate.  A sentence on their home page answering the self-posed question about "why Arizona's fire fighters oppose Sal DiCiccio" always gets a chuckle:   "It has never been the fire fighter way to fight."  True, fire fighters also try to prevent fires and to get everyone to help prevent fires; but actually fighting fires that do occur is a key part of the job description.

(link to the tricky lyrics)
(e-mails below the jump) 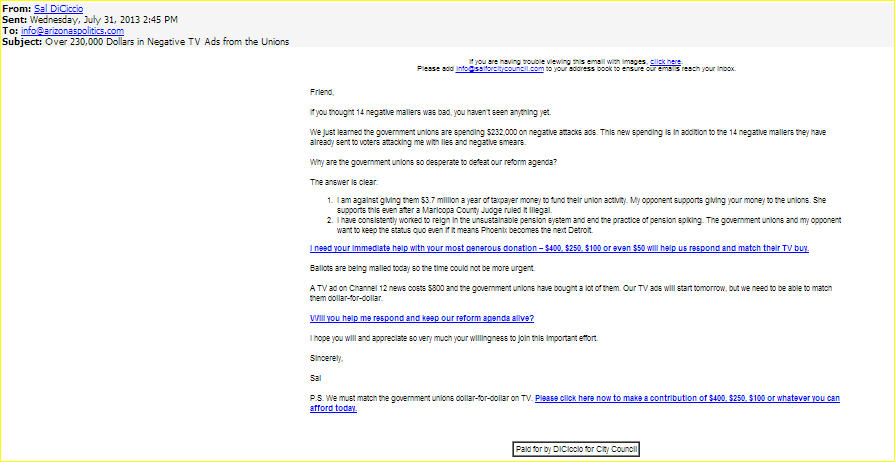 We welcome your comments about this post. Or, if you have something unrelated on your mind, please e-mail to info-at-arizonaspolitics-dot-com or call 602-799-7025. Thanks.
Posted by Mitch M. at 9:48 AM