The lawsuit challenging the validity of the signatures turned in to the Tucson Clerk by the Committee for Sustainable Retirement ("CSR") will continue, following a ruling by Pima County Superior Court Judge James Marner denying CSR's motion to dismiss.

In a ruling (posted below) dated Wednesday, Marner found that CSR's argument that the lawsuit needed to be filed within five days of when they turned in the 23,364 signatures was "a strained/overly expansive application" of a 2008 Arizona Supreme Court opinion.  He noted that there are two different subsections of Arizona Revised Statutes Sec. 19-122, and that CSR was relying on the inapplicable subsection that applies to instances where the Clerk (or Secretary of State) refuses to accept a filed petition. (Subsection C applies, rather than subsection A.) 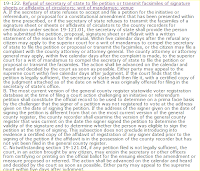 Plaintiffs' attorney Roopali Desai told Arizona's Politics today that "Frankly, the law in this area is abundantly clear and the Committee’s motion was really an attempt to have this judge change the law, which he declined to do."

Desai's lawsuit claims that too many of the petition signatures collected by CSR are invalid, and that the initiative should not be permitted on Tucson's ballot.  Marner has held multiple days' worth of hearings on the validity challenge.

CSR contends that its initiative will put the City of Tucson's pension system on a sustainable path by changing it to a defined contribution plan.


We welcome your comments about this post. Or, if you have something unrelated on your mind, please e-mail to info-at-arizonaspolitics-dot-com or call 602-799-7025. Thanks.
Posted by Mitch M. at 3:27 PM