PTS plans to spend at least $231,000 on airing the ad (or, possibly multiple ads) between the first day of early voting (today) and election day (August 27).  The ad will air mostly during news and information programs.

It recites the hotly-disputed argument lines that PTS and opponent Karlene Keogh Parks have been trying to develop the last couple of months, including taking money from developers and lobbyists and steering the money to a non-profit that he controls.  The latter was the main subject of a lawsuit filed by DiCiccio opponents which was dismissed for being the incorrect venue.

The ad features members of police and fire fighter unions, with shirts identifying them as first responders.  The transcript is below.

--Why are we against Sal DiCiccio? He keeps attacking police officers and firefighters. (Graphic: "DiCiccio: Anti-Public Safety", citing "DiCiccio email blasts and social media posts, 2011-2013")
--Typical DiCiccio.
--He took more than $200,000 from lobbyists and developers. (Graphic: "Lobbyist-Owned", citing "DiCiccio campaign finance filings, 2009-2013, www.phoenixtruthandsafety.com")
--Then, he gave most of it to a company he controls.
--Typical Sal.
--Sal controls a bunch of land by the Loop 202.  He keeps trying to steer the new freeway there.  (Graphic: "In It For Himself", citing Arizona Republic, Ahwatukee Foothills News and video interview.)
--Typical Sal.
--We support Karlene Keogh Parks.  She's independent.  A real businesswoman.  (Graphic: "Police & Fire Support Karlene")
--She's in it for the right reasons. Not for herself.  (Graphic: "Karlene:  In It For Phoenix", identifying disclaimer)
--Please join us.  Vote Karlene Keogh Parks for Phoenix City Council. 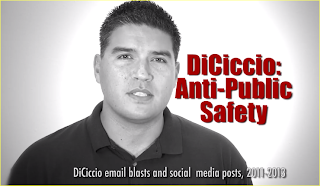 Thank-you for trying to get this information out to the public, Sal is a snake in the grass and he has to use sensationalism and lies because he has no clue what honesty looks like. Look back on one of the final council meetings where Sal stated to the union rep. Sal stated the City pays for the unions, when challenged he asked, "how does the union get its money" the rep stated, "The employees pay their dues out of their paychecks" and then Sal stated, "and where do their paychecks come from"! OMG!!! does that mean Sal believes he should have ultimate control over where I spend my money? Please STOP this monster!!! He is BAD for his district and really BAD for Phoenix!

Unfortunate. I have lived in Phoenix my whole life and I have the highest respect for Firefighters and Police Officers. This campaign has caused me to see them differently. I don't want to think that my public safety officials are playing on the same field as politicians, but that is what this looks like and that's unfortunate.

Firefighters, who commit to sacrifice their lives to save ours, deserve our attention when they take a position on an issue or a candidate. And through that respect, I will listen to them. They rarely ask for anything, but when we need them, we treasure them. So I say...tell me more about what firemen (and other first responders) think.