Maricopa County Sheriff Joe Arpaio announced yesterday that he will erect crosses in the desert where border desert crossers have died - both as a memorial and as an aid to future people taking "a death march" across the same area.  In so doing, he is taking on the U.S. Supreme Court's 2011 decision to not review an opinion striking down a similar government-funded cross memorial program in Utah. 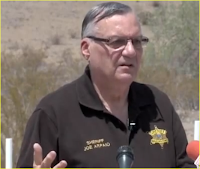 Tragically, the Maricopa County Sheriff's Office announced that it is investigating 14 bodies found in the desert this summer.  Arpaio held a news conference to - in "intentionally dramatic fashion" - to warn off future crossers from the "death march" through the Sonoran desert and to announce the plan to erect crosses.  (A TV news report and the news release are at the bottom of this article.)

Commendably, the crosses to be made by jail inmates and erected by deputies will "be numbered and GPS sensitive" so that anyone who does cross that portion of desert will be able to be located if they call for help.

However, similar memorials - with similar other purposes - were found to be unconstitutional within the past couple of years.  The non-governmental Utah Highway Patrol Association was permitted to erect crosses along highways where patrolmen had died; the crosses were also to include biographical information on the person being thus memorialized.

The 10th U.S. Circuit Court of Appeals found in 2010 that the crosses violated the Establishment Clause (First Amendment) of the U.S. Constitution.  (Opinion posted below; please note that the majority opinion does not begin until about halfway through the document.)  They agreed that memorial crosses have become "symbols of death."

"However, we do not agree that this nullifies their religious sectarian content because a memorial cross is not a generic symbol of death; it is a Christian symbol of death that signifies or memorializes the death of a Christian. The parties agree that a cross was
traditionally a Christian symbol of death and, despite Defendants’ assertions to
the contrary, there is no evidence in the record that the cross has been widely
embraced as a marker for the burial sites of non-Christians or as a memorial for a
non-Christian’s death. The UHPA acknowledges that when it asserts that it would
honor the request made by a Jewish state trooper’s family to memorialize him
with a Star of David rather than a cross."

The opinion was appealed to the U.S. Supreme Court, and in October 2011, the Justices decided not to review the 10th Circuit's decision.  Justice Clarence Thomas published a 19-page dissent to this decision (posted below), stating that it would be a new opportunity for the Court to clarify what violates the Establishment Clause and that the lower court opinion was "incapable of coherent explanation."

The Sheriff did not indicate that private money would be spent to produce and erect these crosses;  to the contrary, he made it appear that this was solely an MCSO project.  Even if he did enlist one or more of his posses - which privately raise funds* - this would not differentiate itself from the Utah project found to violate the Constitution.  (Side thought: it is unlikely that the County owns the land where these crosses may be erected; more than likely, it will be on Arizona- or federally-owned land.)

It would appear that Arpaio is announcing a plan that challenges the current Constitutional law of the land, as recently determined by the current U.S. Supreme Court justices.

* There are reasons to question the independence of some of the MCSO-affiliated posses.  This article explains that the Cold Case Posse - the one investigating President Obama's birth certificate - needs to be filing IRS returns.  The Sheriff's Office denies any involvement in the finances of the posse, but the Cold Case Posse was using its governmental status to not file otherwise-required returns.  The author filed a complaint with the IRS after the Sheriff's Office declined to give any financial information in response to a public records request.  Arizona's Politics notes that other MCSO-affiliated posses HAVE filed the annual returns.


We welcome your comments about this post. Or, if you have something unrelated on your mind, please e-mail to info-at-arizonaspolitics-dot-com or call 602-799-7025. Thanks.
Posted by Mitch M. at 10:26 AM