On the same day the Maricopa County Sheriff and his Chief Deputy admitted to a federal judge that they are guilty of civil contempt for violating Court orders, and pledging at least $100,000 in personal funds, Joe Arpaio sent out a fundraising email asking whether supporters believe that ISIS terrorists are coming across the U.S.-Mexico border.

The jaw-dropping admission of contempt this afternoon is broken and well-covered by the Phoenix New Times.

The email hit supporters' inboxes this morning, with the subject line: "FLASH POLL: ISIS IN AMERICA?" The full email is reproduced below the jump.

Sheriff Arpaio asks the question, but then gives his readers the answer: "You see, everyone is talking about the threat that ISIS and Islamic terrorist pose overseas, but they most certainly pose a threat at home too. Make no mistake, those that are crossing our Southern Border illegally are not just coming from Mexico. They are coming from all over the world and using our Mexican border as their opportunity to enter the United States. " (emphasis in email)

Of course, answering the simplistic poll requires giving your email address and brings you to a donation page, for his re-election campaign. On that page, he estimates he will "have to raise at least 4 million dollars to have a fighting chance."

However, as of this past November, Arpaio's re-election campaign has raised $5.5 million dollars, and he has $2.1M in the bank.*  It is unclear whether contributors' dollars would be the funds that the Sheriff might use for a civil contempt settlement; Arpaio and his supporters have also sent out emails recently for a legal defense fund which may or may not be separate from the campaign fund, and which may or may not be used for the civil contempt settlement.

In a letter today penned by Rep. Martha McSally's office and co-signed by four other Arizona Representatives - Democrats Raul Grijalva, Kyrsten Sinema and Ann Kirkpatrick, as well as Republican Trent Franks - Arizona pleads for reconsideration of the decision to leave all of Arizona with just one processing and distribution center while much smaller states "such as Vermont and New Hampshire" will continue to have two such centers.

The closure has been in the works since 2011.  New Postmaster General Megan Brennan took the leadership position on February 1, offering "a fresh start and a chance to review, and if necessary, (to) reverse prior decisions that no longer make sense."

Arizona Rep. David Schweikert (R-CD6) gave the most impassioned speech of the day in favor of the Secret Science Reform Act of 2015.  The measure, chiefly addressing EPA regulations, later passed the House on a party line vote.

Calling the Democrats' debating points against the measure "intellectually vacuous........because we're not saying things that are true," Schweikert noted that the measure simply requires "public policy made by public data, public data by public policy."  (He also had to tell the Democrats that he was not calling them intellectually vacuous: "No, Madam Ranking Member!  No, you're not!") 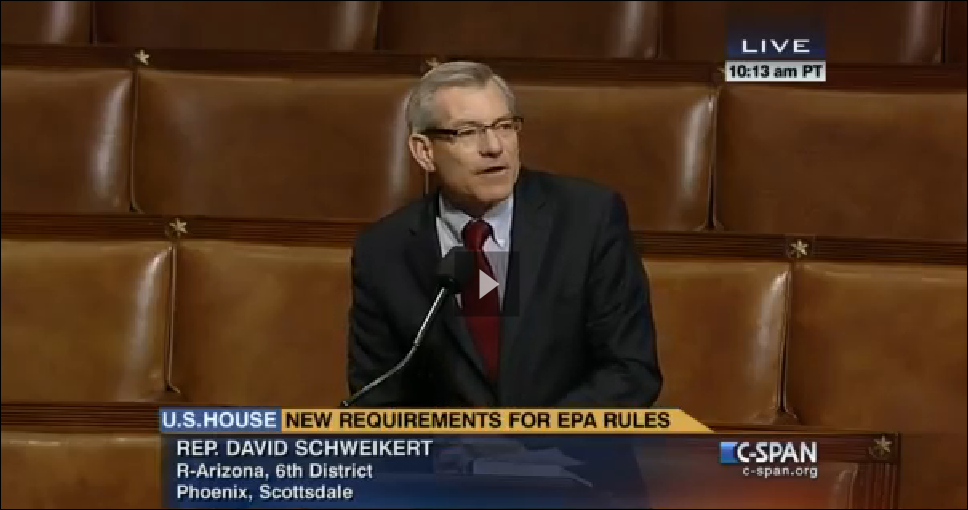 Schweikert was the primary sponsor of this measure last year, when it passed the House but stalled in the Senate.  Though he is not the named sponsor this year, he still took to the Floor and made the case for it. (Schweikert's Deputy Chief of Staff Beau Brunson tells Arizona's Politics that he did not sponsor the measure this year because he is no longer Chair of the Environment Subcommittee.*)

The House voted 241-175** to send it to the Senate, where the new Republican majority is more likely to take it up.  However, the White House issued twin veto threats against it and the companion bill passed yesterday.

The text of the Secret Science Reform Act is as follows:

This Act may be cited as the `Secret Science Reform Act of 2015'.

Section 6(b) of the Environmental Research, Development, and Demonstration Authorization Act of 1978 (42 U.S.C. 4363 note) is amended to read as follows:

`(b)(1) The Administrator shall not propose, finalize, or disseminate a covered action unless all scientific and technical information relied on to support such covered action is--

`(A) the best available science;

`(B) specifically identified; and

`(C) publicly available online in a manner that is sufficient for independent analysis and substantial reproduction of research results.

`(2) Nothing in the subsection shall be construed as--

`(A) requiring the Administrator to disseminate scientific and technical information; or

`(B) superseding any nondiscretionary statutory requirement.

`(B) the term `scientific and technical information' includes--

`(i) materials, data, and associated protocols necessary to understand, assess, and extend conclusions;

`(ii) computer codes and models involved in the creation and analysis of such information;

`(iv) detailed descriptions of how to access and use such information.

`(4) The Administrator shall carry out this subsection in a manner that does not exceed $1,000,000 per fiscal year, to be derived from amounts otherwise authorized to be appropriated.'.

Schweikert also gave props to Arizona State University in his talk. After somewhat-facetiously acknowledging that the Massachusetts Institute of Technology is "where all the really smart kids are, right," he said that ASU, the "next smartest school in the nation" should be able to take EPA studies and "bounce them up" against their research.

* In fact, Schweikert is no longer a member of the House Science, Space, and Technology Committee.

Sen. McCain Takes Email Harvesting To Court, With An Assist From ESPN and the NCAA

Arizona Senator John McCain has made it to his own Final Four.  Final Two, actually, in 2008.  Now, he is using the NCAA Men's Basketball Tournament (sorry, ASU women) to "challenge" supporters and potential supporters.

The email (shown below in its entirety) has the simple subject line "I Challenge YOU!", and gives people a chance to click on the picture: 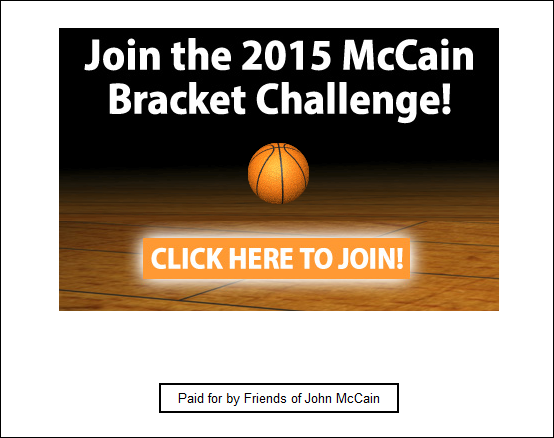 The landing page asks you to input your name, email address and zip code - although it does not indicate it, only the email is "required".  You then have to use an ESPN account before you can enter your picks for the tournament, and compare them to McCain's.

Arizona tips off play on Thursday, the lone representative from the state in the field of 64 68.  As McCain, who is expected to run for reelection next year, will likely say, "Bear Down!"


We welcome your comments about this post. Or, if you have something unrelated on your mind, please e-mail to info-at-arizonaspolitics-dot-com or call 602-799-7025. Thanks.
Posted by Mitch M. at 6:35 PM No comments: 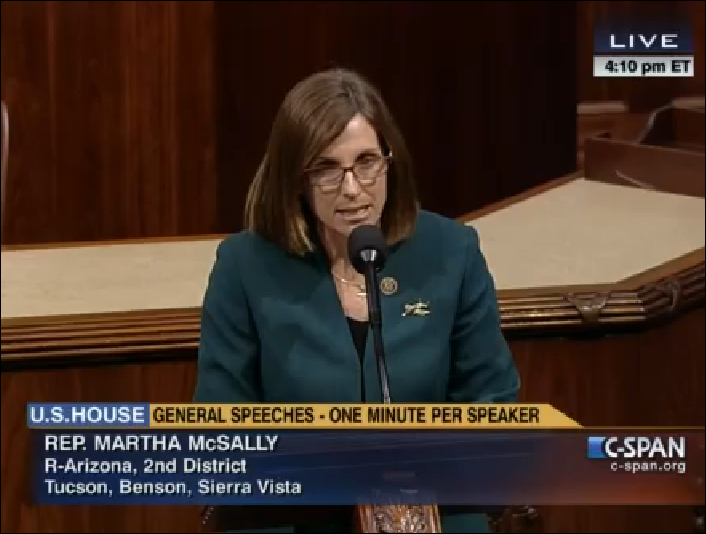 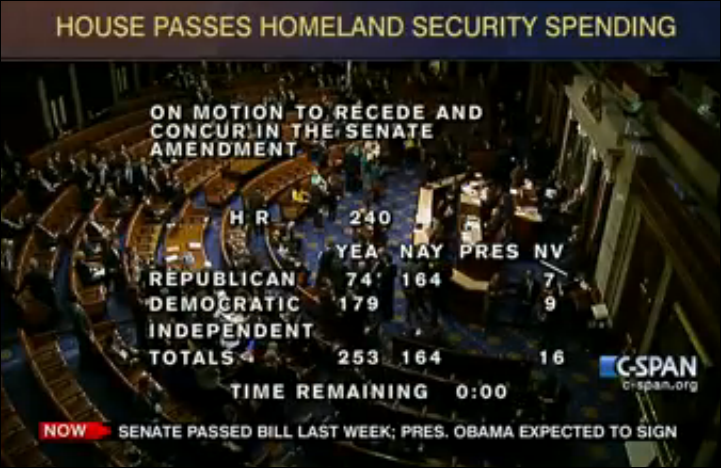 Arizona's Rep. Martha McSally (R-CD2) was the only Republican in the House to vote "aye".


We welcome your comments about this post. Or, if you have something unrelated on your mind, please e-mail to info-at-arizonaspolitics-dot-com or call 602-799-7025. Thanks.
Posted by Mitch M. at 1:13 PM No comments: