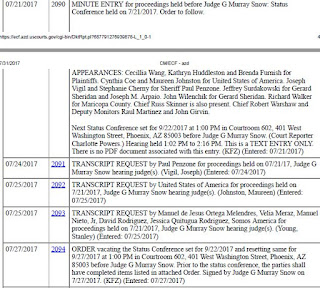 We welcome your comments about this post. Or, if you have something unrelated on your mind, please e-mail to info-at-arizonaspolitics-dot-com or call 602-799-7025. Thanks.
Posted by Mitch M. at 11:34 AM No comments:

Arizona Reps. Tom O'Halleran (D-CD1) and Kyrsten Sinema (D-CD9) were two of only five Democrats voting this evening for the Defense Appropriations bill which includes what Republicans are trumpeting as a down payment on the President's border wall.

The final vote on the $769 billion bill was 235-192. (Five Republicans also crossed the aisle to vote "nay", though none were from Arizona.) The contentious border wall funding was a key part of a so-called "mini-bus" of four appropriations bill dubbed as the "Make America Secure Act".

O'Halleran released a statement calling it a "bipartisan" spending bill, focusing on the benefits to Arizona (veterans, water projects) and decrying the "legislative gimmick" that included the funding for the wall:


“As I have said before, our immigration system must be reformed through a bipartisan process that includes an investment in 21st century technology and additional support for border patrol agents. These are proven methods that secure our border. A border wall is not. House leadership should not be using legislative gimmicks to circumvent regular order and divide Congress on the final passage of a bill that is so critical to our national security.”

Sinema's statement toed a similar line as O'Halleran's, noting the "bipartisan" nature and her opposition to the wall.


“Our top priority is to keep Arizona families and our country safe. This legislation responsibly funds our military to ensure our men and women in uniform have the tools they need to protect our nation.

"It gives our troops a 2.4% pay raise, funds programs like the A-10, Apache, and F-35 that support good Arizona jobs, and funds the Veterans Health Administration so our veterans can receive the care they deserve. By working together, we can keep our country safe and support servicemembers, veterans, and their families.

“I do not support every provision in this bill and voted twice to remove funding for the border wall. The wall is a waste of taxpayer money that will not ever be built, and won't keep us safe. Congress must work together on effective border solutions and comprehensive immigration reform that secures our country and strengthens our economy.”

On the flip side, Rep. Martha McSally (R-CD2) voted with nearly all of her Republican colleagues BUT conspicuously failed to mention the border wall funding in her extensive statement about the victory.


“As a 26-year veteran of the Air Force, I am committed to ensuring that our military has the resources it needs to be prepared at all times and that our veterans receive proper care. This bill restores readiness shortfalls, gives our troops a pay raise, and invests in equipment and training for our troops to counter ISIS and other threats. It also provides funding for better and increased access to care for our veterans.

This bill supports Southern Arizona’s defense assets by fully funding the A-10 fleet, the Tomahawk missile line at Raytheon, crucial intelligence missions at Ft Huachuca. It also increases army end strength by 10,000 personnel. There are many dangerous threats facing our nation today. This bill ensures we have the tools, resources, equipment, training, and morale to address these challenges.”

The appropriations bill now heads to the Senate, where it will likely be significantly re-shaped.

We welcome your comments about this post. Or, if you have something unrelated on your mind, please e-mail to info-at-arizonaspolitics-dot-com or call 602-799-7025. Thanks.
Posted by Mitch M. at 6:07 PM 1 comment:

Senator Jeff Flake (R-AZ) hit pause on the Senate's healthcare debate this morning (AZ time) in order to pass an emergency bill to authorize the release of some of the donated funds to the two U.S.
Capitol Police officers injured last month in the Congressional Baseball Classic practice shooting.

Flake - who himself was one of the heroes during that June 14 incident - asked for unanimous consent to pass the Wounded Officers Recovery Act (H.R. 3298). It was quickly given and the general debate on our healthcare system resumed.


U.S. Capitol Police special agents Crystal Griner and David Bailey were at the early morning practice, and engaged in a shootout with the would-be assassin (he was killed). They have been treated and released. Their protectee, House Majority Whip Steve Scalise, was injured and got out of the hospital this week.

Donations poured in to the U.S. Capitol Police Memorial Fund in Griner and Bailey's honor. However, federal law only permits families of killed officers to receive donated monies donated to the fund. Today's measure specifically adds Griner and Bailey to the permitted recipients. (Text below)

The bipartisan bill was co-sponsored in the House by Arizona Reps. Tom O'Halleran (D-CD1) and Ruben Gallego (D-CD7).

The measure was passed by unanimous consent in the House on Monday and now heads to the President.


We welcome your comments about this post. Or, if you have something unrelated on your mind, please e-mail to info-at-arizonaspolitics-dot-com or call 602-799-7025. Thanks.
Posted by Mitch M. at 10:19 AM No comments:

Here is the video and the closed-captioning transcript of Arizona Senator John McCain's impassioned plea for the Senate to get back to being "the world's greatest deliberative body." The closed captioning was provided by C-Span (and is not always fully accurate)

(Click on the picture below, the video will pop up in a new window.) 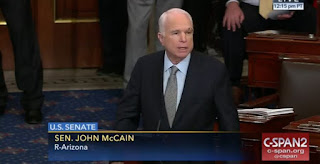 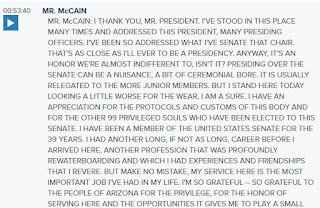 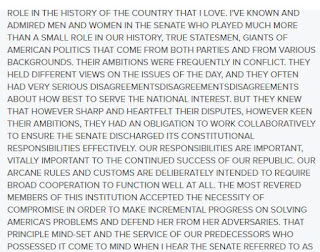 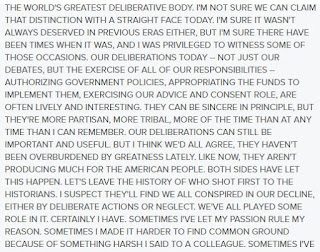 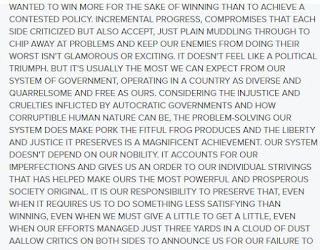 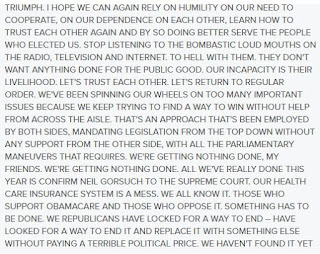 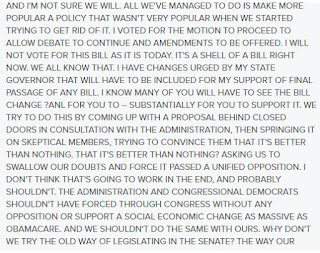 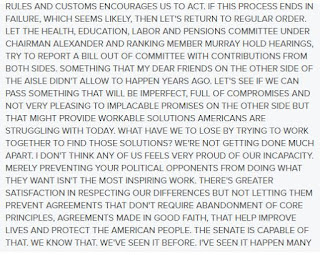 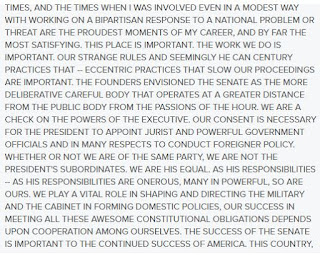 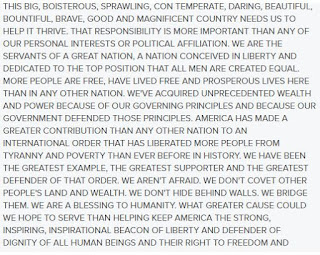 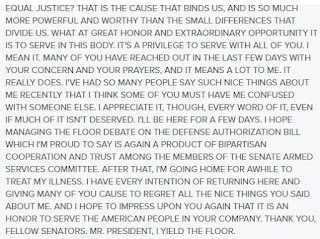 We welcome your comments about this post. Or, if you have something unrelated on your mind, please e-mail to info-at-arizonaspolitics-dot-com or call 602-799-7025. Thanks.
Posted by Mitch M. at 12:51 PM No comments:

Arizona Senator Jeff Flake (R) - up for re-election next year, not coincidentally - is in the glare of the national spotlight today as the possible deciding vote on the latest Senate effort to repeal the Affordable Care Act.

Politico splashed his photo on their lead story this morning (below) 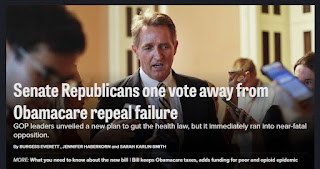 "I'm still digesting it," the Senator told reporters this morning after the new version was released. "I'll be doing that for awhile," he added.

Flake is facing mounting pressure from both his right and his left. Texas Senator Ted Cruz singled him out for praise this morning on KFYI this morning, after Flake told the station that he would be supporting Cruz' amendment permitting non-compliant plans to be sold alongside Obamacare-compliant health insurance policies.

We welcome your comments about this post. Or, if you have something unrelated on your mind, please e-mail to info-at-arizonaspolitics-dot-com or call 602-799-7025. Thanks.
Posted by Mitch M. at 12:20 PM No comments: