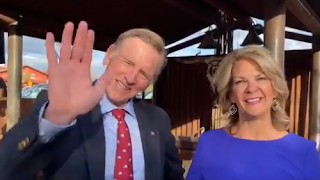 According to this week's filing with the Federal Election Commission, Gosar raised $120,000 in the 11 weeks following the insurrection. That was double his average receipts for his five previous comparable* efforts. In fact, his collections the past three months from contributors across the country was nearly one-fifth of what he raised in the entire 2019-2020 cycle.
Standing out among the new contributions was a $1,000 contribution from the United Keetoowah Band of Cherokee Indians in Oklahoma. An analysis of Gosar's reports indicate that political contributions from Native American nations in Arizona and around the country have dropped significantly in the past couple of years.
Arizona's Politics has reached out to UKB officials in light of this week's news that Gosar is co-founding an America First Caucus in Congress, with a manifesto that calls for Americans and immigrants to have "respect for (our nation's) uniquely Anglo-Saxon political traditions."
*"Comparable" meaning the first quarter of a new election cycle, January through March of an odd-numbered year.
If you would like to show your appreciation for Arizona's Politics reporting, please consider donating to our pool to support OTHER journalism-related nonprofits.
We welcome your comments about this post. Or, if you have something unrelated on your mind, please e-mail to info-at-arizonaspolitics-dot-com or call 602-799-7025. Thanks.
Posted by Paul at 12:09 PM No comments:

First, former Arizona Secretary of State Ken Bennett - who has become "the liaison for the AZ Senate" in the audit effort - has been unable to convince two publicly-owned tech companies that his effort to recruit volunteer observers for the recount is legitimate and is not an effort to promote election misinformation - known to some as the "Big Lie".
Yesterday, Bennett cried "censorship" after Google removed his recruitment form. He announced that he had re-posted the form on Wuhoo/Survey Monkey. It did not take long for that company to also disable his account.
Bennett has declined to answer questions from several reporters (including Arizona's Politics) about how he will ensure that the volunteer observers who claim to be Democrats are not simply re-registered Trump supporters trying to give the Senate GOP's effort a false veneer of objectivity. 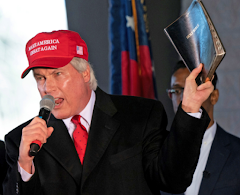 In the second development, the center-left website TalkingPointsMemo.com reported today that the connections between the lead auditor for the effort - Doug Logan of Cyber Ninjas - and admittedly-biased former Trump attorney Lin Wood are far more extensive than previously reported.
Wood apparently provided Logan (and others) with a home and office during late 2020 in order to support his investigations into any possible fraud in the Presidential election.
Further, Wood has contributed $50,000 of the $150,000+ in private donations raised to assist Fann's recount.
If you would like to show your appreciation for Arizona's Politics reporting, please consider donating to our pool to support OTHER journalism-related nonprofits.
We welcome your comments about this post. Or, if you have something unrelated on your mind, please e-mail to info-at-arizonaspolitics-dot-com or call 602-799-7025. Thanks.
Posted by Mitch M. at 3:37 PM No comments: