NEW: Arizona's Kidscare Program Won't Run Out of Money In 2017 Despite Congressional Inaction, Per AHCCCS

Congress is allowing federal funding for the Children's Health Insurance Program ("CHIP") to expire - at least temporarily - this weekend, and Arizona has been identified as one of three states most at-risk. However, the Arizona Kidscare program is "expect(ed) to be funded through the end of the calendar year." 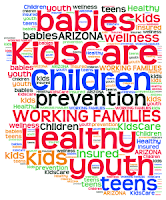 National articles discussing the federal lapse in funding on September 30 have cited an analysis of June data showing Arizona as one of the three states (and the District of Columbia) likely to run out of funding sometime in October, November or December.

However, AHCCCS Public Information Officer Heidi Capriotti tells Arizona's Politics that they have been working with the Governor's Office and the federal CMS (Center for Medicare and Medicaid Services) to make sure that the 22,000 Arizona children receiving healthcare coverage through the program remain covered.

"Through carry-forward allotments and re-distributions, we expect Kidscare to be funded through the end of the year,"  Capriotti said. She also noted that recent reports from other states indicate that Arizona is not in as dire straits as several others.

The national report using June data expected that Arizona would have $60.1M in redistribution funding from prior allotments and that that would not last more than three months; only Minnesota, North Carolina and the District of Columbia had that small of a cushion.

In fact, while it only shows total revenues and expenses from the Kidscare fund, Arizona's OpenBooksAZ website shows that the state has received approximately $8M from the federal government in the months of July and August, and that the income had exceeded the outgo by about $1.5M. For Arizona's 2017FY (ended June 30, 2017), the revenue exceeded the expenses by approximately $0.5M.

Capriotti also notes that it appears that Congress is starting to move forward on approving the CHIP budget. If Congress and the President approve it in 2017, there would be no actual interruption of services.  She also points out that recent reports from other states indicate that Arizona may not have one of the smallest cushions, after all.

Arizona is required to provide the 22,000 Kidscare members a 30-day notice if the benefits are expiring. No such notice is expected this year.

The national CHIP and its Arizona version have both had rocky periods where the hot winds of politics have threatened to run them aground. The current storm does not appear to be a Cat 5...yet.

We welcome your comments about this post. Or, if you have something unrelated on your mind, please e-mail to info-at-arizonaspolitics-dot-com or call 602-799-7025. Thanks.
Posted by Mitch M. at 5:36 PM No comments:

Here is her announcement video:

We welcome your comments about this post. Or, if you have something unrelated on your mind, please e-mail to info-at-arizonaspolitics-dot-com or call 602-799-7025. Thanks.
Posted by Mitch M. at 5:01 PM No comments:

The letter (below) renews the GOP's call from July to set up another Special Counsel alongside Robert Mueller, in order to follow up on Congress' previous investigations into alleged Obama Administration wrongdoings. The Committee expresses concern that then-FBI Director James Comey and others may have pre-determined not to charge former Secretary of State and 2016 Democratic Presidential nominee Hillary Clinton for having classified documents on her private email server.

Mueller is investigating the 2016 election and alleged ties between the Trump campaign/Administration and claimed Russian interference.


We welcome your comments about this post. Or, if you have something unrelated on your mind, please e-mail to info-at-arizonaspolitics-dot-com or call 602-799-7025. Thanks.
Posted by Mitch M. at 2:07 PM No comments:

In a case that received national attention, the Arizona Supreme Court unanimously decided this morning that both women in a same sex marriage are legal parents to a child born during the marriage.

The ruling vacates the Court of Appeals opinion finding that the non-birth mother in the lesbian marriage did not have the same parental rights after the marriage was dissolved.

Justice Clint Bolick agreed with the other six justices as to the determination that Suzan was a legal parent - due to the U.S. Supreme Court's recent decisions - but wrote a dissenting opinion as to the effects on Arizona's paternity statutes.

We welcome your comments about this post. Or, if you have something unrelated on your mind, please e-mail to info-at-arizonaspolitics-dot-com or call 602-799-7025. Thanks.
Posted by Paul at 11:26 AM No comments: