This could make for some awkward conversations (and potential conflicts of interest), or maybe it is only a matter of the political world being too small for the ever-expanding universe of presidential candidates.

John McCain (R-AZ) is best friends with fellow Senator Lindsey Graham (R-SC)
and is Graham's biggest cheerleader for his 2016 Presidential campaign.  However, one of only three people on McCain's (campaign's) payroll - week-in and week-out - is Salvatore Purpura. Purpura is listed as Assistant Treasurer for Friends of John McCain, Inc.

Brian Rogers, McCain's Communications Director, tells Arizona's Politics that "there's no conflict there at all".  "Sal has worked in treasury operations for Senator McCain's campaign committees for many years, going back to his last presidential campaign. Sal got his start in politics working for Governor Bush, and worked on three of his campaigns."

With the long, long list of major Presidential candidates seeking the two major parties' nominations, this is probably not the only instance of people working for multiple officials' campaigns who might be pulling in different directions.

On a side note, with McCain's campaign's four employees all working in or near Washington, D.C., Communications Director Rogers also tells Arizona's Politics that the Senator "is staffing up in Arizona now." (Watch this space for "announcements in the near future.")


* Arizona's Politics digitally-stumbled upon this information while attempting to find a McCain campaign press person to ask questions about another subject. McCain had not yet hired a campaign spokesperson.  Arizona's Politics has reached out for comment to the new Communications Director for the campaign, and will supplement this article as warranted.


We welcome your comments about this post. Or, if you have something unrelated on your mind, please e-mail to info-at-arizonaspolitics-dot-com or call 602-799-7025. Thanks.
Posted by Mitch M. at 2:12 PM No comments:

Arizona Reps. Matt Salmon and Trent Franks are among 18 Republican Congressmembers signing a letter pledging to oppose any funding measures that provide any support to Planned Parenthood.

The letter to House leadership comes as concern about undercover videos regarding Planned Parenthood and fetal tissue from abortions continues to mount.  The funding threat is of particular interest as the deadline for continued funding of the federal government (again) approaches.

We welcome your comments about this post. Or, if you have something unrelated on your mind, please e-mail to info-at-arizonaspolitics-dot-com or call 602-799-7025. Thanks.
Posted by Mitch M. at 5:35 PM No comments:

READ: Arizona Court of Appeals Did NOT Just Permit "Voting Early And Often"

Contrary to the lead sentence of an article, and a tweet touting the article, Arizona judges did not just decide "voting early and often is not illegal in Arizona.'

The appellate opinion reverses the conviction of a Bullhead City woman who allegedly voted ballots in both Arizona's and Colorado's 2010 elections.  After noting that the woman claims that she did not actually vote the Colorado ballot (she returned the envelope with a note saying she had moved to AZ), the judges find that because there were no races in common on the two ballots - it was not a Presidential election - it would not have run afoul of Arizona's voting statutes.

It turns out that the old quip about voting early and often is not illegal in Arizona. http://t.co/0a9qDVz0AK
— Arizona Daily Sun (@azds) July 29, 2015


While catchy, that is simply not at all close to the finding of the Court.  Here is the statute, and here is the unanimous opinion:

We welcome your comments about this post. Or, if you have something unrelated on your mind, please e-mail to info-at-arizonaspolitics-dot-com or call 602-799-7025. Thanks.
Posted by Mitch M. at 5:13 PM No comments:

Ann Kirkpatrick Raises $432K In 5 Weeks, Has $637K In Bank For McCain Challenge

Democratic Rep. Ann Kirkpatrick (D-CD1) raised more than $432,000 in the 5 weeks after she announced that she would challenge Sen. John McCain next year.  After transferring $259,000 from her House re-election campaign, Kirkpatrick had more than $637,000

in the bank when the 2nd quarter ended on June 30.

However, that is dwarfed by the more than $4.5M that McCain had in his checking account that morning (in addition to his name ID advantage).

Arizona's Politics obtained a copy of her summary report that was filed with the U.S. Senate on the 15th.  It has not yet publicly appeared on the FEC's website. (See below)

Kirkpatrick announced her decision to forego running for reelection to her very competitive Congressional seat (she was 2-1 in elections there) on May 26.  Between April 1 and May 25, she raised $100,000 for that campaign.  Combined with almost all of the cash on hand she had in that ("Kirkpatrick for Arizona") account, she transferred more than $259,000 to the new "Kirkpatrick for Senate" committee.

However, interestingly, on May 25 (the day before the announcement), she received nearly $30,000 from more than 20 different PACs.*

*Federal election laws do not permit those PACs to "double up" their contributions by the House-to-Senate switch; they will still be limited to the $5,000 limit. Most likely, the contributions were timed to improve her individual-to-PAC ratio in her Senate campaign; That often becomes a talking point for candidates and a data point in reporters' articles.

We welcome your comments about this post. Or, if you have something unrelated on your mind, please e-mail to info-at-arizonaspolitics-dot-com or call 602-799-7025. Thanks.
Posted by Mitch M. at 11:58 AM No comments:

In the quarter ending June 30, John McCain, Arizona's senior U.S. Senator, took in 1/3 LESS money than he had in the quarter BEFORE announcing his re-election bid.  However, the $1.4M still more than doubles his Democratic opponent's.

McCain also had more than $4.5M in the bank when he opened his eyes on the first day of this month.  His announced Republican opponent, state lawmaker Kelli Ward does not have to this separate article.

McCain fundraised hard in the first quarter, telling potential donors that he wanted to hear from them to help him make up his mind about whether to run for a 6th 6-year term.  The money spoke loudly, and he took in more than $2.1M.  Coupled with transfers of more than $1.1M from his 2008 Presidential race committee, and the astounding cash on hand total is easily understood.

In this past quarter, McCain raised nearly $1.0M ($977,000) from individuals, and $244,500 from PACs (political action committees).  He spent more than half-a-million to raise that money and to power his campaign.  The full report, filed on the 15th but just made public this morning, is below (and, here:


We welcome your comments about this post. Or, if you have something unrelated on your mind, please e-mail to info-at-arizonaspolitics-dot-com or call 602-799-7025. Thanks.
Posted by Mitch M. at 11:53 AM No comments:

Arizona Senator John McCain went to the national press today to express his concern that Donald Trump (and Joe Arpaio) "fired up the crazies" at Saturday's rally in Phoenix.  McCain told the New Yorker's Ryan Lizza that he had helped "to some degree regain control of the (Arizona Republican) Party.”

McCain is running for reelection next year, and faces a primary challenge from state lawmaker Kelli Ward, and a Democratic challenge from Rep. Ann Kirkpatrick (D-CD1).

Even though it was "very hurtful to me", McCain still referenced Trump as "our friend" (no surprise there). “It’s very bad. This performance with our friend out in Phoenix is very hurtful to me, because what he did was he fired up the crazies.”

He also acknowledged that he has been fighting to push extremists (who oppose him) out of the Arizona GOP.  “We did to some degree regain control of the Party.”

But McCain fears that Trump may be reversing those gains. “Now he galvanized them,” McCain said. “He’s really got them activated.”

McCain's campaign finance report for the 2nd quarter of this year is not yet available. It was due yesterday, but the U.S. Senate permits Senators to file on paper, which then need to be converted before being published on the internet.

We welcome your comments about this post. Or, if you have something unrelated on your mind, please e-mail to info-at-arizonaspolitics-dot-com or call 602-799-7025. Thanks.
Posted by Mitch M. at 10:36 AM No comments: 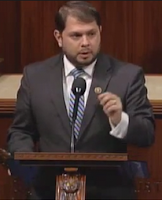 Gallego is in a fairly safe Democratic district - that is not going to be subject to Republican-caused redistricting - and thus does not have to raise as much money as an incumbent in a more-competitive district.

He filed his report earlier today.

We welcome your comments about this post. Or, if you have something unrelated on your mind, please e-mail to info-at-arizonaspolitics-dot-com or call 602-799-7025. Thanks.
Posted by Mitch M. at 5:45 PM No comments:

Arizona Congressmember Martha McSally (R-CD2) has amassed a $1.4M campaign warchest in the first six months of her rookie term, and raised more than $1.0M in the 2nd quarter.

McSally's campaign finance report was filed today, and shows that direct mail fundraising, national PACs and a $109,000 fundraiser are responsible for more than half of her 2Q receipts.

Rep. McSally won the ultra-competitive southern Arizona Congressional district on her third try, and has swiftly moved to raise the money needed to retain the seat next year against any opponents from her right or left.  (State Rep. Victoria Steele announced that she will seek the Democratic nomination, and does not need to file her first campaign finance report until October.)

Of the $1,049,453 in campaign receipts in the 2nd quarter, approximately $345,000 came from unitemized contributions (less than $200/individual).  This makes sense after noting that the campaign spent about $153,000 on postage between April and June.


We welcome your comments about this post. Or, if you have something unrelated on your mind, please e-mail to info-at-arizonaspolitics-dot-com or call 602-799-7025. Thanks.
Posted by Mitch M. at 5:22 PM No comments: