Kanye West's doomed 2020 Presidential campaign spent $14.3M. Nearly $4.8M of it was run through Arizona's Fortified Consulting, which a Daily Beast report today explains how it was used to hide Republican fingerprints from Ye's "independent" campaign and how that might have violated federal law. 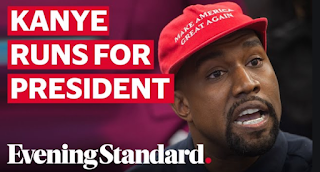 Fortified Consulting shares the same Tempe address as Lincoln Strategy Group, run by GOP consultant Nathan Sproul. Sproul has a long history of pushing the envelope for Republican candidates and causes. Sproul acknowledges that he set up the new company to support independent campaigns.
Today's Daily Beast article, however, suggests that the purpose was to make it harder to show that Republican operatives and attorneys around the country were behind the efforts to get West on the ballot in various states.
Federal Election Commission reports show campaign money being put into the Fortified funnel, but do not show where that $4.7M came out. 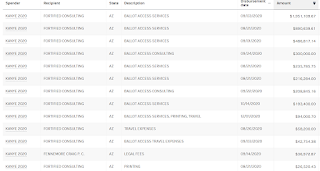 Arizona Republican attorney Tim LaSota received $10,000 directly from the campaign (he may have received more from Fortified) - he represented the West "campaign" in Arizona and acknowledged in the Daily Beast article that Republicans realized they could use it "to influence things."
Arizona law firm Fennemore Craig was also paid $37,000 directly by the campaign to represent the West electors in Arizona who were the defendants in the court challenge (which led to them being removed from the ballot).
If you would like to show your appreciation for Arizona's Politics reporting, please consider donating to our pool to support OTHER journalism-related nonprofits.
We welcome your comments about this post. Or, if you have something unrelated on your mind, please e-mail to info-at-arizonaspolitics-dot-com or call 602-799-7025. Thanks.
Posted by Mitch M. at 3:32 PM No comments:

State Rep. Mitzi Epstein (D-LD18) and former Rep. Diego Rodriguez praised the Arizona Department of Corrections, Rehabilitation and Reentry for ordering the removal of offensive patches from the uniforms of special operations officers. The lawmakers intervened after the Arizona Republic's Jimmy Jenkins reported on the patches and challenge coins made up of lightning bolts, skulls and cross bones and crossed shotguns - symbols that could be likened to Nazi and gang imagery.
The ADCRR sent a letter to the lawmakers this week confirming that they would remove the patches, and admitting that the Department had been responsible for permitting them in 2018.
Epstein told Arizona's Politics that it was a victory for government oversight and democracy:

It's a great thing when people work together and listen.  Just listen.  The ADCRR chose the correct action: stop using the patch. They wrote that they want to be, "sensitive to the way that others may interpret its meaning."   This is how democracy and government oversight should work.  I spoke up to the prison authorities as a representative of the people, and they listened.
Rep. Rodriguez brought years of experience in justice reform to the table, and together our teamwork has yielded a very good first step.

Rodriguez and Epstein met with ADCRR officials in early November, and just learned of the results of the investigation with Tuesday's letter. Rodriguez also praised ADCRR:

The department made the correct decision. That patch and it’s images should never have been produced with taxpayer funds and the patches should never have been approved for use by sworn officers.  I am hopeful this decision is a small signal that the department understands its obligation to take all available information into consideration when it is forming policy meant to serve all the people of our state. Rep. Epstein showed real leadership and I was happy to team up with her and our caucus staff on this issue.

Epstein quipped the Department may again change its formal designation. "I look forward to more work with the AZ Department of Corrections, Rehabilitation, Re-entry and Sensitivity."
If you would like to show your appreciation for Arizona's Politics reporting, please consider donating to our pool to support OTHER journalism-related nonprofits. http://bit.ly/AZpDonate
We welcome your comments about this post. Or, if you have something unrelated on your mind, please e-mail to info-at-arizonaspolitics-dot-com or call 602-799-7025. Thanks.
Posted by Paul at 8:25 AM No comments:

A "nonsensical claim of defamation" could open Kari Lake up to a deposition to "explore the entire range of her mental health and stability."

When more than half of the social media universe is wondering whether the campaign of an Arizona gubernatorial frontrunner is just crazy or crazy like a fox, perhaps it is not the best idea to sic your attorney on a GOP political consultant.

Kari Lake ordered GOP attorney Tim LaSota to issue a cease and desist letter to Brian Murray, who also has been the Executive Director of the AZGOP. Murray had the temerity to question Lake's presumptions about Gov. Doug Ducey and her "media obsession". It was a mild tweet in questionable taste that only garnered one "like" and a couple of responses. (All the responses questioned his use of the word "bipolar".)

LaSota followed through, claiming that that word was defamatory, and that Murray does not have "carte blanche" just because Lake is a public figure. LaSota did not count on Murray retaining Chandler attorney and retorter extraordinaire Tom Ryan to respond on his behalf.

Ryan did not hold back. And, he invited LaSota to sue everyone who wonders about Lake. Read his response here:

RESPONSE to Nonsensical Claim of Defamation by arizonaspolitics on Scribd

A lawsuit and ensuing deposition are unlikely.

If you would like to show your appreciation for Arizona's Politics reporting, please consider donating to our pool to support OTHER journalism-related nonprofits.
We welcome your comments about this post. Or, if you have something unrelated on your mind, please e-mail to info-at-arizonaspolitics-dot-com or call 602-799-7025. Thanks.
Posted by Mitch M. at 12:17 PM No comments: