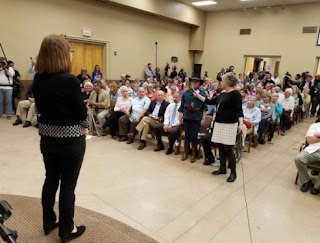 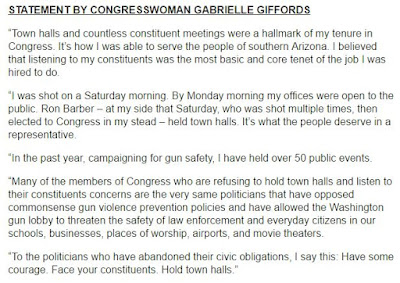 We welcome your comments about this post. Or, if you have something unrelated on your mind, please e-mail to info-at-arizonaspolitics-dot-com or call 602-799-7025. Thanks.
Posted by Mitch M. at 6:11 PM No comments:

The Arizona Supreme Court decided today that it would like to hear oral arguments on the Arizona Chamber of Commerce's lawsuit challenging the voter-approved minimum wage increase.

The Justices set a 40-minute oral argument for March 9. They only want to hear arguments regarding the claim that the measure forces the state to spend money and the appropriate relief. They rejected the arguments put forth by the Chambers of Commerce that the initiative violated state law by addressing two different issues (minimum wage and paid time off).


We welcome your comments about this post. Or, if you have something unrelated on your mind, please e-mail to info-at-arizonaspolitics-dot-com or call 602-799-7025. Thanks.
Posted by Mitch M. at 5:31 PM No comments:

TODAY'S TRUMP TWITTER TRASHING TARGET: McCain Again In Crosshairs; Endures It In Silence, While Friends Successfully Come To His Defense

Arizona Senator John McCain remained tight-lipped on becoming Today's Trump Twitter Trashing Target(tm pending), as the President renewed his attacks on "our hero" McCain. However, Senate colleagues on both sides of the aisle rushed to McCain's defense.

Trump lashed out at McCain's mild criticism of the U.S. raid on an al Qaeda facility in Yemen which resulted in the death of Navy SEAL Ryan Owens. McCain had originally called the operation "a failure", but his statement this week indicated that any operation which results in loss of American lives should not be called "a success".

That was enough for President Donald Trump to re-lash out at McCain in his regularly-scheduled tweets of the morning. Here is the three tweet series (read from bottom tweet, up) 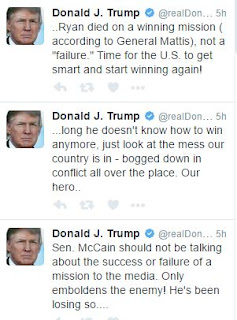 The seemingly-sarcastic "our hero", and the references to "embolden(ing) the enemy" and "losing" all bring back to mind Trump's previous Twitter trashings of McCain and the period (after the Republican National Convention) when Trump and McCain temporarily endorsed each other.

While McCain has remained silent today about the tweets - he is handling a hearing on Afghanistan - other Senators have expressed their feelings about the simultaneously offensive and defensive Trump tweets. As the Washington Post reported:


But other members of the Senate Armed Services Committee, in both parties, had plenty to say to Trump in McCain’s defense.

“That’s a dangerous error, for President Trump to continue to trash John McCain,” said Sen. Ben Nelson (D-Fla.), adding that McCain “is a guy who knows what he’s talking about” when it comes to the military.

McCain’s closest friend in the Senate, Lindsey Graham (R-S.C.) added that the Trump administration should be more careful about how he tries to cast the Yemen raid to the public.

“One thing I would advise the Trump administration is: Don’t oversell success,” Graham said, noting that he thought the Obama administration oversold the success of various missions, to its detriment. He also advised to focus on finding common ground with Congress instead of picking fights with members like McCain.

“I don’t think President Trump will have a better ally in the United States Congress when it comes to rebuilding the military than John McCain,” Graham said.

One of Trump's earliest dust-ups in his successful Presidential campaign was when he said that McCain is not his idea of a war hero because he had been captured. His ability to weather the uproar and outrage from those statements was repeatedly pointed to as his ability to say very politically incorrect things and not only weather the storm but gather strength.

Arizona might also be the only state that has repeatedly seen both of its Senators receive twitter trashings from Trump. The now-President has taken offense to Sen. Jeff Flake's standing up to him last year and his statements that he was not sure if he would vote for Trump in November.


We welcome your comments about this post. Or, if you have something unrelated on your mind, please e-mail to info-at-arizonaspolitics-dot-com or call 602-799-7025. Thanks.
Posted by Paul at 12:31 PM No comments: