Reps. Ruben Gallego (D-CD3) and Greg Stanton (D-CD4) joined all Republicans and 95 other Democrats in voting "aye". Rep. Raul Grijalva (D-CD7) was the only Arizonan to vote "nay".
The language of the bill could fit on a postcard: "Notwithstanding any other provision of law, the Secretary of Energy shall not draw down and sell petroleum products from the Strategic Petroleum Reserve—
(1) to any entity that is under the ownership, control, or influence of the Chinese Communist Party; or
(2) except on the condition that such petroleum products will not be exported to the People’s Republic of China.
The issue arose last year when gas prices skyrocketed and the government sold off a portion of the reserves. The measure is largely symbolic because (a) it is not likely to pass the Senate and be signed into law by President Joe Biden, and (b) because even the sales from the reserve are part of a global petroleum market - the price per barrel paid by China would be the same if the reserve barrels were sold domestically or to China.
***
1/27, 3pm: "Lake and Senior Advisor Lose In RNC Chair Battle; Latter Makes News For Expletive-Filled Campaigning"
No word on the language former Arizona gubernatorial candidate Kari Lake used in California today during the RNC meeting, but her senior advisor made some national news for it.
Lake and Caroline Wren were at the meeting trying to help Harmeet Dhillon push Ronna McDaniel out of the RNC Chair. According to Politico's reporting, Wren's efforts as top adviser seemed to focus on dropping f-bombs.
Wren had also been an advisor to former President Donald Trump and was a key fundraiser for the Jan. 6 efforts.
McDaniel retained the Chairmanship. Wren's streak continues. 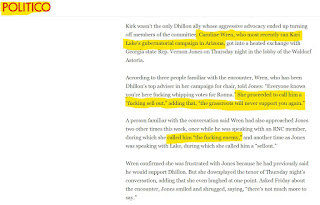 If you would like to show your appreciation for Arizona's Politics reporting, please consider donating to our pool to support OTHER journalism-related nonprofits. http://bit.ly/AZpDonate
We welcome your comments about this post. Or, if you have something unrelated on your mind, please e-mail to info-at-arizonaspolitics-dot-com or call 602-799-7025. Thanks. 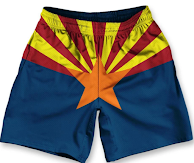 (CORRECTION: This article has been re-written to reflect that Eddie Farnsworth is not a brother of current State Sen. David Farnsworth. Eddie's brother named David is the current Executive Director of the entity which purchased the Benjamin Franklin Charter Schools from Eddie. Arizona's Politics regrets any confusion resulting from the error.)
Congratulations to former State Senator and Charter School mogul Eddie Farnsworth. His new $19.5M Arizona IDA bond issue hit the market this past week, to benefit the Queen Creek campuses.
Farnsworth's brother, David (not related to the current State Senator David Farnsworth), is the Executive Director of the Benjamin Franklin Charter Schools.  David represented BFCS at the Nov. 30 meeting when Arizona agreed to grant its blessing to make the loan (aka the bonds) tax-free to the lenders (the bondholders). Bond experts Moody’s notes that the charter schools will now have $89.5M in state sponsored bonds outstanding.
While with the Arizona Republic, Craig Harris* reported extensively on the former lawmaker's efforts to build a long-term money-making charter school operation.
* Get ready, Coronado (CA, and seasonal AZ refugees), Craig announced yesterday that The Coronado News will be starting up on Feb. 1. He'll be the editor. Congratulations to David AND Craig!

If you would like to show your appreciation for Arizona's Politics reporting, please consider donating to our pool to support OTHER journalism-related nonprofits.
We welcome your comments about this post. Or, if you have something unrelated on your mind, please e-mail to info-at-arizonaspolitics-dot-com or call 602-799-7025. Thanks.
Posted by Mitch M. at 11:38 AM 1 comment: