OFF-TOPIC: Ex-Cardinal Star's New Film Debuts Today At A Theater Near You

Sure, he made a few stops along the way*, but Simeon Rice has now gone from the Arizona Cardinals to having his screen-writing/directorial/producerorial(?) debut tonight.

The Rolling Stone reports on "Unsullied", which it calls a "survival-horror film".  It will be opening at several Valley-area theaters tonight. 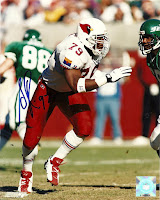 Rice was a top draft pick for the Cardinals, and became a sack stud in his four years in Arizona.  He was a key force in getting the team to the playoffs in his 3rd year, and was an always-entertaining interview on sports talkshows and TV.

We probably won't be seeing this movie, but we wish him all the best in his new line of work.  Here's how he compared the two:

"In football, what you see is what you get. It's a dog-eat-dog business, but the best will survive. The team that is supposed to win does win. The best person will win. Football is honest," he says. "You can't prepare for something like making a film. The hope is people connect with it, but that's an abstract thing. You can be the best actor in the world, but you still might not get the part. You can make the best film in the world, but that doesn't mean people are going to see it."


* Yeah, including the Super Bowl-winning stop in Tampa Bay, dammit.

We welcome your comments about this post. Or, if you have something unrelated on your mind, please e-mail to info-at-arizonaspolitics-dot-com or call 602-799-7025. Thanks.
Posted by Mitch M. at 2:44 PM No comments: 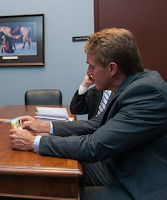 We welcome your comments about this post. Or, if you have something unrelated on your mind, please e-mail to info-at-arizonaspolitics-dot-com or call 602-799-7025. Thanks.
Posted by Mitch M. at 10:31 AM No comments:

The U.S. Chamber of Commerce spent more than $600,000 last year to help elect Martha McSally (R-CD2) in a nail-biter of a race.  To help re-elect her next year, they are looking at battering one or both of her possible opponents in the Democratic primary.

As the AP quotes from the Chamber's memo - written by its top political operatives to be considered by its Public Affairs Committee - Democrats have recently acknowledged playing in GOP primaries to their benefit, so this would be a fair turnabout.  Missouri Senator Claire McCaskill recently wrote a detailed piece on Politico about how she paid for advertisements to assist the ill-fated Todd Akin to win the primary there in 2012, because he was seen as the weakest Republican candidate in the general election

It is unclear whether the Chamber would try to bolster Steele, Heinz or some other candidate-yet-to-be-named, or would just bash whoever is leading in the primary contest.  The Chamber's ads in the past are usually your stereotypical negative ad (e.g. "the world will end if you support X"), but it occasionally dabbles in positive ads.

In that article, Arizona's Politics also slotted the U.S. Chamber of Commerce as "as dark as they come" on its #50ShadesOfDarkMoney scale.  The Chamber religiously does not disclose the identities of donors to its $68,000,000+ (in last two cycles) independent expenditure fund.  It ranks as a "50" on the 1-50 (1 being fully open) scale.

We welcome your comments about this post. Or, if you have something unrelated on your mind, please e-mail to info-at-arizonaspolitics-dot-com or call 602-799-7025. Thanks.
Posted by Mitch M. at 9:47 AM No comments:

In late July, a rogue drone came within 100 feet of a Navy T-45 Goshawk jet flying near Yuma. In the past three weeks, there have been three close calls between drones and aircraft in the Phoenix area.

official to the Washington Post, and reported on this afternoon.  The article begins with a swarm of close calls - 12 - around the country on Sunday, but the Arizona naval close call is highlighted further down in the article.

The Navy T-45 Goshawk (built by McDonnell-Douglas) was apparently flying out of the Marine Corps Air Station in Yuma on approximately July 24 when a "drone buzzed 100 feet underneath the trainer aircraft," according to the reporting pilot.

One of the three August close calls in the Phoenix area involved an American Airlines passenger jet.  According to the Post:

AA605 arrives into Phoenix from Columbus (OH), and then departs to Calgary (Alberta).

The other two near misses involved small planes (and, smaller drones).

Drones are largely unregulated, but are becoming the focus of increasing concern because the number of near-misses is growing rapidly.

The Post article indicates that the the FAA reports were leaked to them because the "government official... objected to the FAA’s secrecy. Laura Brown, an FAA spokeswoman, declined to comment on the reports obtained by The Post."

We welcome your comments about this post. Or, if you have something unrelated on your mind, please e-mail to info-at-arizonaspolitics-dot-com or call 602-799-7025. Thanks.
Posted by Mitch M. at 1:58 PM No comments:

(UPDATE, 8/13, 1:00p,m.: The 30-second version of the new ad is now available on ASI's YouTube page, and is presented at the bottom of this article. ASI has not yet released the Flake-specific ad.)

Arizona Senator Jeff Flake (R-AZ) is about to be hit hard about his vote on the Iran nuclear deal.  A combination of a veteran who was the victim of an Iranian-financed bomb blast (in Iraq, 2005) and a bipartisan group led by ex-Senators have purchased approximately $445,000 in 30- and 60-second ads on Phoenix television stations, beginning Friday.

The American Security Initiative, Inc. is a 501(c)(4) group that is not disclosing where the money for the $6.2M ad blitz (in 8 other states) is coming from.  The Phoenix ad buy is approximately $445,692. (see below for copy)  They are teaming up with a group called Veterans Against the Deal. 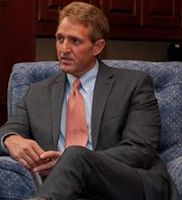 The 60-second ad (below) features Retired Staff Sergeant Robert Bartlett, who shows and describes the bomb blast that "cut me in half from the left corner of my temple down through my jaw."  He states that Senators who vote to approve the agreement with Iran and other countries will "have blood on their hands" because the money Iran will make after sanctions are lifted will fund more terrorism.  (A point that President Obama has conceded while claiming that the deal will forestall Iran from obtaining nuclear weapons.)

Flake continues to be undecided on how he will vote next month, but his comments do seem to indicate that he is very skeptical of the agreement.  He has already been the target of an ad campaign by the Citizens for a Nuclear Free Iran (believed to be financed by the American Israel Public Affairs Committee ("AIPAC")).

This new American Security Initiative was created by four ex-U.S. Senators (Norm Coleman, Evan Bayh, Joe Lieberman, and Saxby Chambliss). The two Republicans and two Democrats have/had very close ties with AIPAC.  The ASI ran an explosive ad on the subject back in March, when Congress was negotiating with the Administration how to handle a then-hypothetical agreement.


We welcome your comments about this post. Or, if you have something unrelated on your mind, please e-mail to info-at-arizonaspolitics-dot-com or call 602-799-7025. Thanks.
Posted by Mitch M. at 6:05 PM No comments:

As the Arizona TV air campaign wound down, McCain keynoted the Chamber's Procurement Council and explained how he was helping open up Defense Department spending for more and newer defense contractors.*

The rare off-year, large-scale political ad buy came as McCain was at the top of the news for his back-and-forth with Trump, and ran frequently on Phoenix airwaves through this past weekend.  FCC filings showed that the U.S. Chamber spent at least $266,000.  (Surprisingly, it did not run on Tucson TV stations.)  Combined with production and internet advertising, the total came to $350,150.

Coincidentally, as the ads stopped running, McCain - as Chair of the Senate Armed Services Committee - went before Chamber members and explained how the National Defense Authorization Act (NDAA) that he has been working on contains a lot of acquisition reform measures for the Pentagon, to fight the "emerging innovation gap".


“That’s why a major focus of the NDAA is improving access to non-traditional and commercial contactors. The NDAA incentivizes commercial innovation by removing barriers to new entrants into the defense market. By adopting commercial buying practices for the Defense Department, the bill makes it easier for non-traditional firms to do business with the Pentagon. And crucially, we ensure that businesses are not forced to cede intellectual property developed at their expense to the government."

Also at the U.S. Chamber of Commerce's event last week, McCain was asked about whether the Senate should have a Select Committee on Cyber Security.  "I've been banging around the idea," was McCain's response. He noted - to DefenseOne.com - that there are at least six committees that have some oversight.

* Of course, many of those new "innovators" are likely to be Chamber members and part of its Procurement Council.

We welcome your comments about this post. Or, if you have something unrelated on your mind, please e-mail to info-at-arizonaspolitics-dot-com or call 602-799-7025. Thanks.
Posted by Mitch M. at 4:44 PM No comments: