Forget The Birth Certificate, Some Will Now Want To See Obama's Marriage Certificate; "Marriagers" Are Birthed

(UPDATE, 10/6/12, 9:30am: After a lengthy check of Dreams From My Father, Arizona's Politics was unable to find any reference to the date that Barack and Michelle Obama were married.)

Welllll, since we are in debate mode, we could lead this by saying "Well, there you go again!"  President Obama led off last night's debate by wishing his wife, Michelle, a Happy Anniversary.  Both he and GOP nominee Mitt Romney made little jokes about celebrating it at a debate. 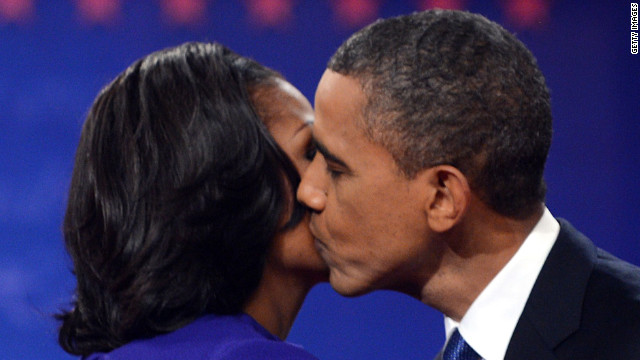 However, some Obama opponents are questioning whether the President has lied to the American people.  (They would add the word "again".)  They have uncovered cites showing that the 20th anniversary will not take place until October 18, meaning that he made a cynical and dishonest play for good feeling at the debate. 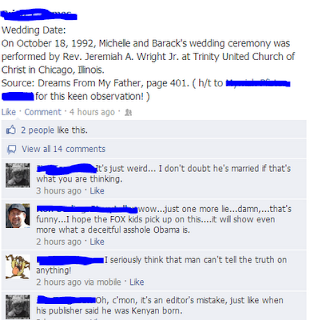 If you can read the initial post, he notes that the source is Obama's memoir, and thanks a California woman for pointing it out.  I have not yet been able to verify that source, but did find that biography.com does use the October 18 date.

The Facebook discussion references that Wikipedia mysteriously pulled the wedding date off of its site, but we were able to find that the Michelle Obama article still lists the October 3 date as being their anniversary, and the history page does not show any removals.  Additionally, the ever-authoritative People Magazine website ran an article yesterday on that day's anniversary.

Fortunately, telling the truth about your wedding date (or, for some unsuccesful candidates, "wedding dates") is not a constitutional prerequisite for being President;  otherwise, we would be reporting on a hastily-called Sheriff Arpaio news conference this afternoon.


We welcome your comments about this post. Or, if you have something unrelated on your mind, please e-mail to info-at-arizonaspolitics-dot-com or call 602-799-7025. Thanks.
Posted by Mitch M. at 2:14 PM