Arizona Rep. Kirkpatrick Misses Hurricane Sandy Relief Votes Due To Personal Obligation, Also Met With Veterans; Will Unfairly Mark Her As One Of "Most Absent"

In reviewing the Arizona Congressional delegation votes on the Hurricane Sandy relief package earlier today, Arizona's Politics noted that Democratic Rep. Ann Kirkpatrick had been absent.  We have now learned that Kirkpatrick had a "personal obligation" that kept her in Arizona, and that she had notified House colleagues "well in advance" of the conflict.  While in Flagstaff, she was also able to hold "several constituent meetings", including one with veterans at the American Legion lodge. 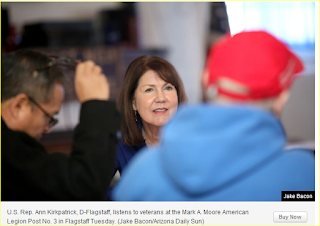 The votes on several of the proposed amendments to the $50.7B Hurricane Sandy relief package were very close, but none turned on just one vote.

Kirkpatrick was named as the Democrats' ranking member on the House Veterans' Affairs Subcommittee On Oversight and Investigations.

The 16 missed votes on Monday and Tuesday will look bad on those absenteeism figures that periodically receive attention, as she currently has a 30.4% voting record for the month.  However, as Arizona's Politics noted last session when Republican Ben Quayle missed a series of amendment votes, that can often be a misleading ranking.


We welcome your comments about this post. Or, if you have something unrelated on your mind, please e-mail to info-at-arizonaspolitics-dot-com or call 602-799-7025. Thanks.
Posted by Mitch M. at 2:41 PM