One hour after the press conference with four of the other Senators involved in the new immigration reform proposal, Arizona Sen. John McCain (R-AZ) went on Fox News to elaborate on the portion of the package that they say needs to be in place before the "tough but fair path to citizenship" can be implemented: border security.  McCain repeatedly raised the need for more drones along the border. 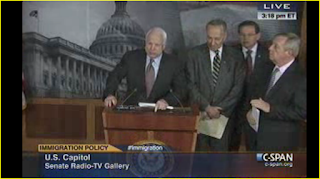 'Secure the border first' has been the mantra repeated by many opponents to comprehensive immigration reform since the last major effort in 2007.  The skeleton for the new proposal makes that a condition precedent and one of the four basic pillars:

"Create a tough but fair path to citizenship for unauthorized immigrants currently living in the United States that is contingent upon securing our borders and tracking whether legal immigrants have left the country when required."

The only details the Senators gave in the document about their plans for securing the border were:

"To fulfill the basic governmental function of securing our borders, we will continue the increased efforts of the Border Patrol by providing them with the latest technology, infrastructure, and personnel needed to prevent, detect, and apprehend every unauthorized entrant. Additionally, our legislation will increase the number of unmanned aerial vehicles and surveillance equipment, improve radio interoperability and increase the number of agents at and between ports of entry. The purpose is to substantially lower the number of successful illegal border crossings while continuing to facilitate commerce."

Fox News was firstly interested in this aspect of the plan, and McCain elaborated, repeatedly referencing the need for more drones along the border, and especially in the Tucson Sector.


McCain's references to drones immediately brought to mind the additional surveillance technology sent to southern Arizona in the wake of the previous immigration reform in the 1980's.  The drug blimp - Aerostat - flew for years over Fort Huachuca, and never received much credit for help in slowing down the flow of drugs or humans across the border.  The blimp has apparently been down for the past 18 months, since crashing into a nearby neighborhood in 2011.  (An incident residents still talk about while saying that many of the details of the wind-caused crash remain secret.)


We welcome your comments about this post. Or, if you have something unrelated on your mind, please e-mail to info-at-arizonaspolitics-dot-com or call 602-799-7025. Thanks.
Posted by Mitch M. at 10:25 PM