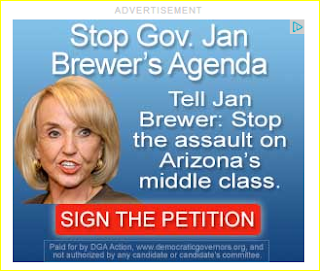 The DGA is asking people to tell the Governor to "Stop the assault on Arizona's middle class."  However, click on the button to "sign the petition", and the message is that she is "focusing on partisan attacks and defunding Planned Parenthood."

Brewer and Attorney General Tom Horne (and many state lawmakers) are, in fact, continuing their court fight to defund Planned Parenthood.  After October's U.S. District Court ruling granting an injunction against a law that would prevent Planned Parenthood from receiving reimbursement for any services provided to AHCCCS patients, Brewer and Horne filed an appeal with 9th Circuit Court of Appeals.  That appeal will be fully briefed next month and argued subsequently; meanwhile, the case continues at the District Court level.

***
And, as Arizona Capitol Times notes, Governor Brewer is using her quasi-official Facebook page to pitch her own SuperPAC's petition to encourage the federal government to secure the border.  Online petition battles - for all that they are worth - continue to run rampant.


We welcome your comments about this post. Or, if you have something unrelated on your mind, please e-mail to info-at-arizonaspolitics-dot-com or call 602-799-7025. Thanks.
Posted by Mitch M. at 4:45 PM