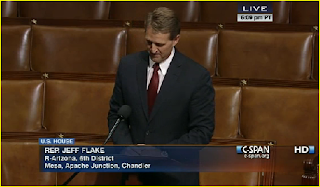 Arizona Rep.-today-becoming-Senator Jeff Flake (R-CD6) delivered his House farewell speech on December 20, 2012.  (Arizona's Politics blames the holidays for not having found and posted this sooner.)

He lamented that more people do not see the genuine moments of debate and persuasion, noting that those moments "frequently happen(s) late at night when members are less concerned about whether folks are watching at home; I wish more people would tune in during such non-scripted discussions. It represents Congress at its best."

Flake also noted that he - like many in the House - used to refer to the Senate Chamber as "enemy territory", and that he will now have to repent for that. "But, at least my penance will be practiced during a six-year term," he joked to an audience of a few House members serving two-year terms.

We welcome your comments about this post. Or, if you have something unrelated on your mind, please e-mail to info-at-arizonaspolitics-dot-com or call 602-799-7025. Thanks.
Posted by Mitch M. at 8:22 AM