Maricopa County Sheriff Joe Arpaio's campaign committee is kicking into high gear to battle the just-filed recall effort.  Besides the hard-nosed fundraising e-mail to supporters across the nation, Arpaio Campaign Manager Chad Willems sent out a news release calling on Respect Arizona to disclose its list of donors. 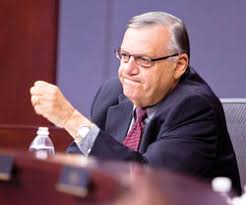 Willems stated that this is necessary because the recall is coming so soon after voters re-elected Arpaio to a sixth term in November.  “Therefore we call upon the Respect Arizona committee to publicly disclose their list of donors. If this recall effort is truly about respecting Arizona the committee should have no problem in being open and honest with Arizonans by disclosing who is paying for this effort.”

Under campaign finance law, the Respect Arizona group's first disclosure statement will not be due for several months.

Arpaio's campaigns have been on the other end of finance-related demands and complaints in the past.  In October, Willems claimed a complaint filed by a supporter of Arpaio's opponent suggesting that expenditures were not appropriately listed was "just another desperate tactic from one of our opponents."

In his fundraising e-mail, Arpaio claimed that his opponents had already "raised over $1.3 million to defeat me," which might explain the call for disclosure.  However, as Arizona's Politics fact-checked, there is no evidence that any money has already been raised (although some undoubtedly has and more pledged).

We welcome your comments about this post. Or, if you have something unrelated on your mind, please e-mail to info-at-arizonaspolitics-dot-com or call 602-799-7025. Thanks.
Posted by Mitch M. at 11:37 AM

One does not have to wait to know the donors are not concerned Arizonians. They are a mixed bag of criminals who wish to see Arizona and the US turned into a third world nation. The communists will not stop their attacks.