The National Journal published a report based on a memo it obtained from the National Republican Congressional Committee (:NRCC") including Arizona Reps. Ann Kirkpatrick (D-CD1) and Ron Barber (D-CD2) among seven "vulnerable" House seats it plans to win in 2014.

Neither are much of a surprise, as they both went into overtime vote counting in November, and both represent swing districts.  Interestingly, the NRCC is not including new Rep. Kyrsten Sinema (D-CD9) in their initial target list.

The article features a picture of Kirkpatrick, who the Republicans (Paul Gosar) knocked off once before (2010).  Although, after re-districting, Gosar decided to avoid a re-match with Kirkpatrick and now represents CD4. 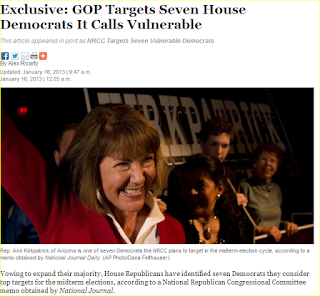