Arizona Senator Jeff Flake (R-AZ) was among the minority voting against the House Republicans' plan to suspend the U.S.' debt ceiling until May - including the provision that suspends some or all Congressional paychecks starting on April 15 if a budget blueprint is not passed.  The measure passed this afternoon, 64-34 (it required a simple majority). 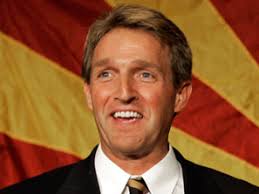 Arizona's other Senator, shrinking violet John McCain, joined 11 other Republicans in voting for the package, which now heads to the President's desk.

Here is the text of what is called the "No Budget, No Pay Act of 2013".  It was designed to advance the House Republicans' talking point that the Senate Democrats have not passed a budget for the past few years.  It will force each House of Congress to pass "a concurrent resolution" by April 15, or that House's or Houses' Members will not receive their paychecks until the end of the Congressional session (or a budget is passed).  (Not yet sure if each House can pass its own "concurrent resolution", which would kind of be where we have been the past several years.)

We welcome your comments about this post. Or, if you have something unrelated on your mind, please e-mail to info-at-arizonaspolitics-dot-com or call 602-799-7025. Thanks.
Posted by Mitch M. at 5:51 PM