Democrats campaigning at the polls yesterday in parts of Maricopa County were handing out literature repeating the claims initially made in an apparently-illegal TV ad run the last two weeks of the campaign by the self-titled "Committee For Justice and Fairness" ("CFJF").  The CFJF receives all of its funding from the Democratic Attorneys General Association ("DAGA").

The election day palm cards had positive blurbs about Democratic AG nominee Felecia Rotellini (on the white half.  However, on the black half, it noted that GOP nominee Tom Horne was banned for life by the SEC, voted against tougher penalties for statutory rape, and certified a teacher who had viewed porn while in his classroom.  The latter two claims were from the CFJF/DAGA ad which portrayed Horne as putting our children at risk.  The New Times did some fact checking on those claims - they were misleading and slimy, at best. (later:  the Arizona Republic did a subsequent fact check, finding "technically true" but lacking needed context)

Besides bad taste, the Dems picking up the allegations - likely with the input from the Rotellini campaign - could have ramifications if the Horne complaint is later pursued.  While there had been no overlap between the Rotellini campaigns attack points and those of the apparently-independent expenditure by CFJF/DAGA,
there is now an example of co-opting. 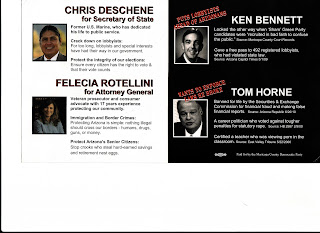 We welcome your comments about this post. Or, if you have something unrelated on your mind, please e-mail to info-at-arizonaspolitics-dot-com. Thanks.
Posted by Mitch M. at 4:54 PM