FOLLOW-UP: "The Disbarment That Never Happened" Followed By "The Campaign That Will Never Happen"

Call it a fortuitous confluence of evernts.  Call it a harmonic convergence.  Whatever you call it, it appears that a combination of events resulted in the most-wishful announcement in my memory.

It was only one week ago that Arizona's Politics noted that former Maricopa County Attorney Andrew Thomas had been selected as the unlikely speaker for the Annual Meeting of the Paradise Republican Women's Club ("PRWC") this past Saturday (Nov. 10), and that they (Thomas and/or the PRWC) had wiped away Mr. Thomas' disbarment for wrongly pursuing political prosceutions, noting that he had been "exonerated."

Then, on Sunday, the Arizona Republic ran a front page article about all of the people looking at possible runs for the Governorship in 2014.  Thomas was not mentioned.

It only took two more days for Thomas to put his name out there. The snapshot below was posted on Arizona Republic columnist Laurie Roberts' Facebook page Tuesday at 4:59pm (snapshot added Wed. a.m.) 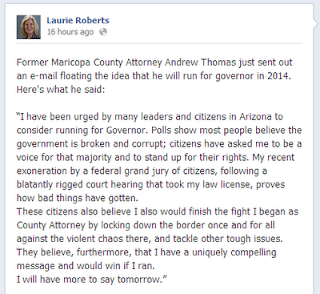 This morning, according to Republic reporter Yvonne Wingett Sanchez, he said that he is "seriously" considering making the run and that he would have more to say within 90 days (Feb. 12, just before Arizona's 101st birthday - maybe, he meant 92 days).  He apparently did not elaborate about which "leaders and citizens" have urged him to run and believe that he "would win".


We welcome your comments about this post. Or, if you have something unrelated on your mind, please e-mail to info-at-arizonaspolitics-dot-com or call 602-799-7025. Thanks.
Posted by Mitch M. at 5:32 PM