Arizona Rep. David Schweikert (R-CD5-->CD6) apparently voiced his concerns about being removed from the Financial Services Committee to House Speaker John Boehner today in the closed door House Republican Conference.  According to Politico, Schweikert "want(s) to know where the line of acceptable behavior is." 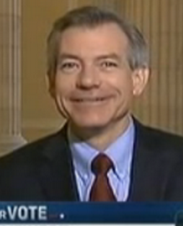 The freshman Republican from the East Valley is enjoying a wave of positive attention from this intra-party fight.

The Politico article notes that "sources" are saying that Schweikert and the other three lawmakers removed from good committee assignments were removed not for ideological reasons, but because they "worked against their colleagues or leadership."

Arizona's Politics asked Schweikert's spokesperson yesterday how the current committee shuffling compared to any shuffling that occurred when he was in the Arizona state legislature.  He has not yet responded, but apparently did note at the House Republican Conference today that he had had to kick people off of committees when he was the Majority Whip in the Arizona House.

We welcome your comments about this post. Or, if you have something unrelated on your mind, please e-mail to info-at-arizonaspolitics-dot-com or call 602-799-7025. Thanks.
Posted by Mitch M. at 1:50 PM

Congressmen are supposed to represent the will of their constituents. Party loyalty and punishments remind me of stories of the Soviet Union from the 50's and 60's. This is another sad day for our Country and the evolution of our Government.