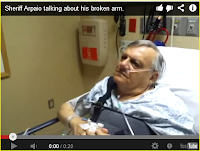 Maricopa County Sheriff Joe Arpaio has his wife, Ava, out front fundraising for him while he is at home - recuperating from his broken arm and "doing his job".

The fundraising e-mail - disguised as a "Get Well Card" - is reproduced in full below the jump.  Ava rails on against those trying to recall the sixth-term sheriff, as well as the "political shenanigans" of the Obama Administration and the man who "threatened to kill my husband because he does not like Joe's fight against illegal immigration."

She says the get well wishes "really lifts his spirits and means so much to him."  The e-mail does not request any financial support.

But, of course, once you "submit" your best wishes to Arpaio (at a special "get well" page), you are taken to a donation page.  The "Elect Sheriff Joe Arpaio" committee was formed in January - before the recall effort was announced - for his 2016 re-election campaign.
A Message from Ava Arpaio

If you haven't heard by now, my husband Sheriff Joe Arpaio had a little accident last week. He fell and broke his arm. The poor guy is in a lot of pain, but he hasn't stopped doing his job for a minute.

This accident came at the worst possible time. As you may know, there is a RECALL effort against him to remove him from office even though he was just sworn in to a sixth term. It never ceases to amaze me the lengths that his political opponents will go to in order to get him out of office!

On top of fighting a costly recall battle, my Joe is also fighting the Department of Justice, their lawsuits and all their political shenanigans. And, the Department of Homeland Security released thousands of illegal immigrants and is planning on releasing thousands more this month alone!

Just last week a Scottsdale, Arizona man threatened to kill my husband because he does not like Joe's fight against illegal immigration.

Sometimes I just wonder what is going on in our country.

So many good people have sent letters of support to the Sheriff after they learned of his accident. I thought maybe you'd like to sign a "Get Well Card" for him. It really lifts his spirits and means so much to him when he hears from good people around the country who support what he does.

Would you take a minute to send him some well-wishes? You can do so by clicking here.

Your support is invaluable to him as he recuperates and gets ready to go back fighting for the Rule of Law and common sense.

I truly hope you'll continue to support my husband. Your words of support and encouragement will go a long way to helping him through this healing process.

Thank you so much for everything you do.

P.S. Please don't delete this email. It will mean so much for Joe to hear from you and your words of support and encouragement will give him the strength to get back in the fight sooner, rather than later. And please forward this email to some of your friends or family members who might want to drop the Sheriff a note as well. Thank you, from the bottom of my heart!

We welcome your comments about this post. Or, if you have something unrelated on your mind, please e-mail to info-at-arizonaspolitics-dot-com or call 602-799-7025. Thanks.
Posted by Mitch M. at 2:24 PM

Your representation of Ava's email is not completely accurate. The p.s. to forward the email on was not included on the email that I had received. One is not obligated to donate, which I did not. I received a thoughtful thank note back.

Thanks, Anon! I understand your concern, but I believe that my representation was accurate, and I stand by it.

While it was a very nice e-mail - devoid of the name-calling of the Sheriff's previous fundraising e-mails - and it did allow you to "send" your get-well wishes, it is obvious that the real purpose was fundraising. (1) It was sent by his finance committee; (2) it used the broken shoulder (and get-well wish opportunity) to convince you to click through. Who (getting the e-mail) wouldn't want to wish him a speedy recovery? Then, as soon as you send your wishes, your exposed to his donate page; "Hey, this might be better-appreciated than flowers!" It is a come on to convince people to donate.

Because it uses emotions and the courtesy of sending well wishes, I won't be surprised if it gathered more contributions than the hard-ass Mr. Arpaio fundraiser e-mail(s) sent out earlier.(http://bit.ly/AZp448) Unfortunately, we won't know for quite a while - neither his committee nor the recall committee have to disclose contributions for several months.