Well, it has been a day for abortion-related fundraising pitches and a Congressional hearing on one of Arizona Rep. Trent Franks' (R-CD8) bills attempting to outlaw abortions.

It started with a subcommittee hearing chaired by Franks on his bill to ban abortions in the District of Columbia after 20 weeks.  (Video below) His passionate opening statement was followed by a disclaimer from Democratic Ranking Member Jerrold Nadler (D-NY), and questioning of a mixed panel (three women/one man, three in favor/one against).

(Click on picture below for hearing page, then click on "video webcast button";  the hearing inexplicably begins only after about 8 minutes of silence - don't give up.  In fact, move the slider a few minutes in.) 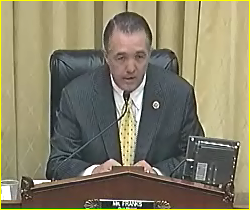 Immediately after the hearing, Franks' campaign office sent out an e-mail (below the jump), trying to  raise funds based upon his pursuit of outlawing abortion and that "NARAL, Planned Parenthood and their pro-abortion friends have targeted me".

Within hours, EMILY's List, a group that raises money to support female Democratic candidates, struck back with an e-mail (below the jump) trying to raise funds based on the fact that all of the Representatives at this morning's hearing were men.

Both of the fundraising e-mails were deceptive.

Franks' missive repeatedly claimed that he is "a top target of the abortion industry", and that that is why he needs contributions to his reelection campaign.  The truth is that neither NARAL nor Planned Parenthood (nor others ideologically opposed to Franks' positions, for that matter) have spent a dime trying to defeat him in his last three elections (according to the Center for Responsive Politics).  The e-mail attached by the Franks' campaign, from MoveOn.org, does target the bill that Franks - and the rest of the Arizona Republican delegation, as co-sponsors - are proposing.

The EMILY's List fundraising e-mail is equally deceptive.  It tries to replay the success that women's groups had last year when House Republicans held a hearing on birth control issues without having any female witnesses on the panel.  (There was a large outcry, and they are trying to get this picture to "go viral", too.)

However, the panel was mostly women, including one who spoke against the measure.  Second, the membership of the subcommittee is all male; but, interested female members of the Judiciary Committee would likely have been welcome to sit in.  (Many of the males in that picture were Democrats who strenuously oppose the bill.)  Third, the subcommittee did not even take a vote on the bill today, as implied in the e-mail.

Abortion is, by definition, a very personal and emotional issue.  It is very easy for sitting Congressmen - and for women's groups - to veer away from facts and honest arguments when attempting to raise passions... and money.  That does not make it right.


(Franks' e-mail, with the MoveOn.org e-mail he attached)
Friend -

The case of Kermit Gosnell - the Pennsylvania abortionist who was just convicted of murdering three born babies- has sent shock waves through the hearts of millions of Americans.

Unfortunately abortions on babies just like the ones killed by Gosnell in Pennsylvania happen literally hundreds of times every single day.

This is not who we are as a nation.

Today I'm asking you to help me fight back.

I have been leading this fight in the United States Congress to end the gruesome practice of late-term abortion. As Chairman of the Constitution and Civil Justice Committee, I am privileged have a unique and influential position to navigate pro-life legislation through Congress - and that is exactly what I am doing.

However, because I have been openly committed for decades to protecting unborn children, I have become a top target of the abortion industry - those who profit from killing of unborn babies.

If I've ever needed your help, it's right now.

As you can see in the message below, NARAL, Planned Parenthood, and their pro-abortion friends have targeted me because I'm pro-life and willing to stand up for the unborn.Killing a helpless unborn child is an unspeakable tragedy all its own. Forcing taxpayers to pay for it makes it even worse.

Because I am willing to fight both, the taxpayer-funded abortion lobby will spend whatever it takes to destroy me and remove me from Congress if they can.

That's why I'm asking you for your support today. Will you contribute $25, $50, $100, or even $500 right now to help me fight back against the abortion lobby's incoming attacks?

My opponents are well-funded and armed to the teeth with vicious anti-life propaganda. Planned Parenthood, the #1 abortionist in the nation, boasts of a $1 billion annual budget, which you and I are forced to subsidize.

I can't compete with their massive, taxpayer-funded war chest, but armed with the truth - and your support - we can stand toe-to-toe with them and win!

But I need your immediate support.

As you can see below, NARAL says they are "really concerned" about what my pro-life legislation will do.

I will never retreat from my lifelong commitment to restore protection to unborn children, and with your urgently needed contribution I will continue to fight the radical pro-abortion lobby that infests Washington, D.C. and forces their anti-life policies on the innocent unborn and on all of us!

P.S. As you can see below, I'm under attack from liberal, pro-abortion special interest groups like NARAL and you need to know why. They're mocking me because I oppose abortion and I don't think taxpayers should be forced to pay for other people's Gosnell-style abortions. And if enough pro-life supporters chip in to help me get the word out about my record, I'll have the resources to expose and defeat their pro-abortion attacks. 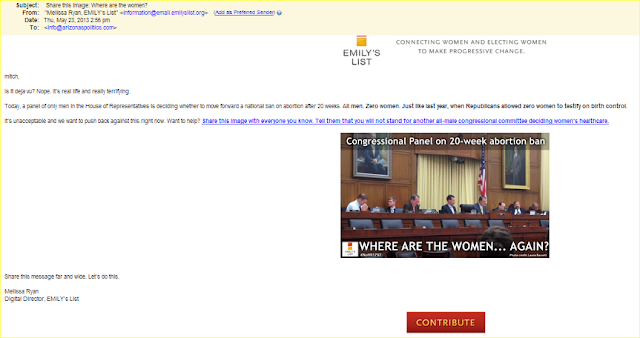 Come on, please, the subcommittee hearing consisted of representatives who were all men. Emily's List was not being deceptive. Don't try to put words in their mouths. You are playing games with your point that the 4-person "panel" called to testify had some women on it. The panel, 3 of whom were on the side of Franks, is not the point. The people with the powere to vote on this subcommittee are all men.