The fundraisers for the 2018 re-election campaign of Arizona Sen. Jeff Flake (R-AZ) must be optimistic that the Congress will get its act together before the weekend.  Politico reported late last week that they were choosing to go forward with a fundraising retreat/dinner at the Royal Palms Resort starting on Friday.

FLAKE FUNDRAISERS STILL PLANNING FOR PHOENIX RETREAT: Sen. Jeff Flake (R-Ariz.) is counting on the shutdown impasse to be resolved soon, it seems. As of Tuesday, his fundraisers are still circulating invites to a Royal Palms Resort & Spa retreat in Phoenix on Oct. 18-20. The event will cost sponsors $2,500 for a VIP guest ticket or $5,000 for a sponsor. They're also hosting a fundraising dinner in Paradise Valley during the same retreat. That dinner costs PACs $1,000 or individuals $500. Donors who are attending the weekend retreat get into the dinner for free. Treasury’s date for a debt ceiling default is on or around Oct. 17 but there is some dispute about that timeline.

Flake's 2018 committee (which Arizona's Politics has reported on before) has apparently not yet filed its October quarterly report (due today, but the FEC's website is somewhat impaired by the shutdown), but as of June 30 (2013) reported only $31,000 cash on hand. 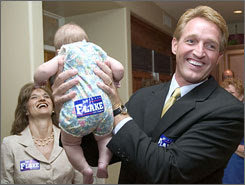 It makes sense to wait until the last possible minute to call off the fundraiser;  however, given the 5-year distance of Flake's next primary contest, it would seem that the committee might have wanted to be more cautious in order to avoid the almost-inevitable publicity.


We welcome your comments about this post. Or, if you have something unrelated on your mind, please e-mail to info-at-arizonaspolitics-dot-com or call 602-799-7025. Thanks.
Posted by Mitch M. at 11:07 AM

I can only speak for myself. I was highly disapointed in Sen Flake. I will not vote nor give money to him.