Arizona Speaker of the House Andy Tobin is off to a rousing start raising funds for his Congressional campaign, tapping into a lot of the same lobbyists and PACs that contributed to his state legislative campaign earlier in the year (2013).


Tobin is involved in a 4-way Republican primary battle for Congressional District 1, currently represented by Democrat Ann Kirkpatrick.  Tobin gathered in $232,520 in contributions and had more than $191,000 of it in the bank on December 31, 2013.

Arizona's Politics has conducted an extensive comparison of Tobin's final state legislative campaign finance report - filed with the Arizona Secretary of State's office on October 31, 2013 - with his first Congressional campaign finance report (posted at the bottom of this article).  The number of lobbyists who contributed to both his legislative campaign in January 2013 (just before the legislative session began) and to his Congressional campaign in the last three months of 2013 is impressive.

It should be noted that Tobin is continuing to serve as Speaker of the House during the legislative session that began this month, and that lobbyists are not permitted to make campaign contributions to Tobin during the session.  (While the legislature that drafted that statute likely did not envision this situation, the language does appear to prohibit contributions to Tobin's Congressional campaign.) 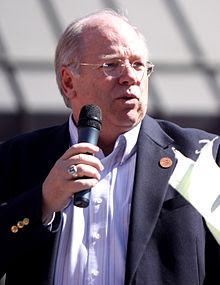 While the lobbyists' contributions were almost entirely in the $250-500 range, the number added up to approximately $20,000.  Even so, that paled in comparison to the $32,000 collected from longtime southern Arizona auto dealer Jim Click, his family members and employees.  Click is serving as Tobin's Finance Committee chairman

One of Tobin's other large source of contributions was Blue Cross/Blue Shield of Arizona.  With many contributions from executives, employees and BC/BS-related PACs, Tobin received more than $10,000 from the health insurer.  Tobin lists BC/BS as a primary source of his income on his most recent financial disclosure statement.

Further review of the report indicates that slightly more than $11,000 of the contributions came from small givers.  That would be under 5% of the total contributions.

Tobin was "thrilled" with the beginning of his Congressioal campaign.  Under the subject line "Wow!", Tobin said, “I am so grateful to all our supporters for helping us with this early success.  I know it’s a big deal to open your wallet and donate your hard-earned money. I appreciate the graciousness of those who have opened their homes to host fundraising events

We welcome your comments about this post. Or, if you have something unrelated on your mind, please e-mail to info-at-arizonaspolitics-dot-com or call 602-799-7025. Thanks.
Posted by Mitch M. at 12:23 AM

Your vote to legalize discrimination is a stain on your record.